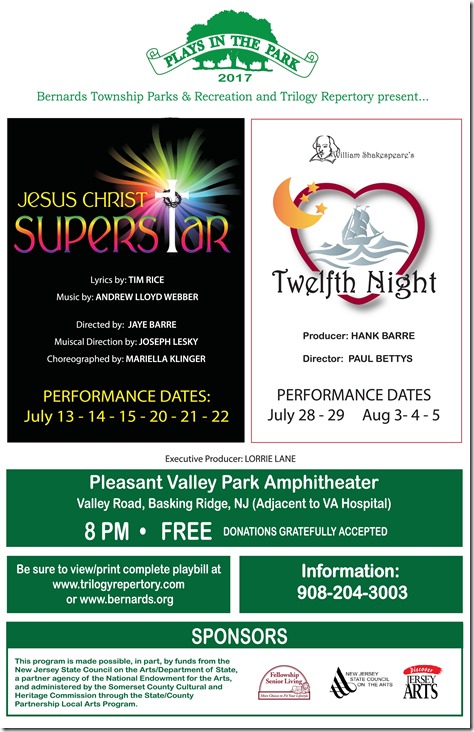 WHEN: July 28, 29, and August 3, 4, and 5, at 8 pm
WHERE: Pleasant Valley Park, Valley Road (next to the Veterans Hospital at Lyons), in Basking Ridge.
ADMISSION: free, but donations are gratefully accepted to help cover the cost of this production
Bring lawn chairs or blankets for seating, and a picnic dinner if you choose.
For information, call 908-204-3003.

Twelfth Night, an enjoyable jumble of mistaken identity, romantic triangles, and colorful characters, was originally written for Queen Elizabeth’s celebration of Epiphany, the twelfth night after Christmas, and was originally entitled What You Will. The play has been produced on Broadway numerous times, most recently during the 2013-2014 season, a production that received six Tony nominations and two awards.  The play has also been a popular vehicle for the movies and television five times in the past thirty years with many familiar faces from both media reprising the roles.

Juliette Hommes of Branchburg and Michael Jay of Hackettstown play the identical twins, Viola and Sebastian, who are separated in a shipwreck.  After Viola disguises herself as a man, The Countess Olivia, played by Emily Miller of Bloomingdale, and a confused Duke Orsino, portrayed by Peter Curley of Maplewood both fall in love with her.  Olivia’s madcap household is comprised of Tim Murphy (Denville) as her hard-drinking uncle, Sir Toby Belch, Kelly Maizenaski (Branchburg) as the wise and witty servant, Maria, and the self-important Steward, Malvolio, is played by Chris Gibbs (Fanwood).  Adam Barr  (Basking Ridge) is the clown Feste, who joins Alicia Hayes (Belleville) as servant Fabian and Aaron Kellner (West Orange) as wealthy, but not too bright, houseguest Sir Andrew Aguecheek as they all torment the overblown Malvolio.  When twin brother Sebastian appears on the scene, confusion reigns.  Other characters include servants Curio and Valentine played by Elizabeth Dreitlein (New Providence) and Elizabeth Sanchez-Quinones (Montclair).   Kevin Vislocky (Hamburg) as Sebastian’s friend Antonio and Hank Barre (Basking Ridge) as the Captain round out this talented cast.  Director Paul Bettys of Parsippany keeps the action moving and the laughs coming in this favorite Shakespeare comedy.

The partnership of Trilogy Repertory and Bernards Township has produced over three decades of family entertainment and achieved several awards for both groups for excellence in theater programming.  Most prominent are the awards from ACT (Achievement in Community Theater) and the prestigious “Excellence in Cultural Arts Programming.”  “Twelfth Night” is made possible, in part, by support from New Jersey State Council on the Arts.