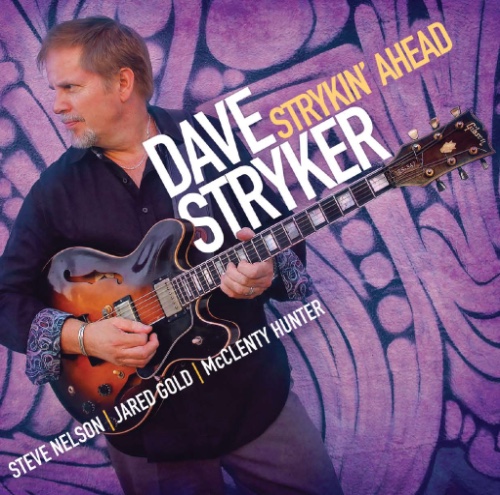 The notion of moving forward by triangulating a space between creative and pragmatic imperatives is a consistent thread throughout Dave Stryker’s four decades in the jazz business, not least on Strykin’ Ahead, his 28th CD as a leader. Stryker augments his working trio of Jared Gold on organ and McClenty Hunter on drums with vibraphone player Steve Nelson, all on-board for a second go-round after their stellar contri- butions to last year’s Eight-Track II. Like the leader, Nelson is a preternaturally flexible and in-the-moment improviser with deep roots in the tradition who knows how to push the envelope without damaging the contents. Stryker internalized those imperatives on a 1984-1986 run with Brother Jack McDuff, and he received further invaluable training in the art of musical communication during a decade on the road with Stanley Turrentine, to whom he paid homage on the 2015 release Don’t Mess With Mister T.

In contrast to his Eight Track II conception of putting his spin on pop hits of his formative years, Stryker returns to his long-standing practice of presenting originals and reharmonized standards from the jazz and show music songbooks. "Shadowboxing" is a burning 14-bar minor blues; his well-considered chordal variations on Wayne Shorter's "Footprints" proceed to a simmering 5/4 figure. Next is "New You" (a stimulating Stryker contrafact of the oft-played "There Will Never Be Another You"). He personalizes Billy Strayhorn's "Passion Flower," set to Hunter's insinuating bossa-funk groove. The title track “Strykin’ Ahead” has a Cadillac-racing-down-the-freeway-feel; he imbues the lovely melody of "Who Can I Turn To" with the full measure of his plush, inviting tone.

That Stryker knows his Albert King is evident on the slow-drag “Blues Down Deep,” which evokes wee-hours third sets in the inner city grills and lounges of Stryker’s apprentice years. He knows his bebop, too. On Clifford Brown’s “Joy Spring,” the solo flights over Stryker’s “modernized” progressions transpire over Hunter’s drum-bass beats and crisp, medium-up four-on-the cymbal; on the chopbusting “Donna Lee,” all members springboard off a churchy vamp and Hunter’s funk-infused swing.

“I’ve always wanted to write vehicles that are fun and interesting to blow over,” Stryker says. “Trying to come up with a beautiful melody that lasts is very fulfilling. Writing is a big part of my voice in this music.” Stryker is too modest to say that his voice is also a big part of jazz, to which he’s devoted a career marked by consistent application of the values that he espouses. But that’s all right—I’ll say it for him. (edited liner notes from Ted Panken)