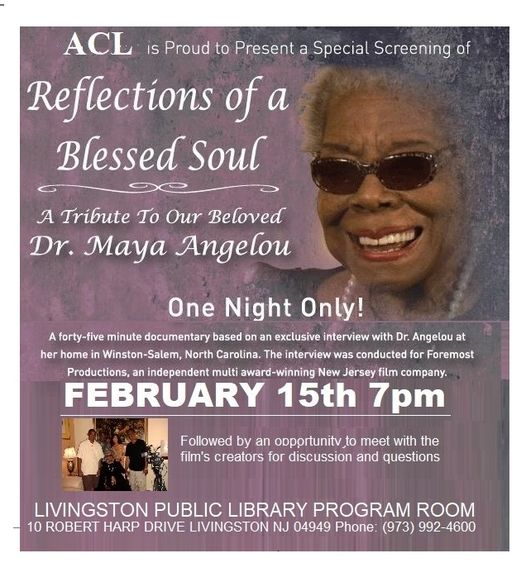 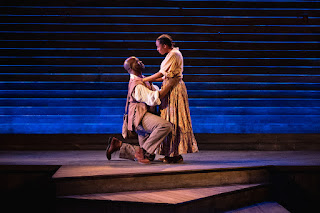 Of all the atrocities perpetrated by Southern plantation owners on their slaves, family separation was perhaps the most egregious. Because slave marriages were not considered legal, masters felt no compunction selling off a spouse or children to settle a debt or raise money for some venture they were planning. (Left: David Roberts and Kara Green as Moses and Hannah celebrate their wedding day.)

This crime is at the heart of Nikkole Salter’s drama, Torn Asunder, now playing at Luna Stage in West Orange through February 26 as part of the celebration of Black History Month. Although I didn’t take the time to make an actual count, I’d bet that the word uttered the most during the play is family—as in actual, related family as well as a less formal family group formed by people working—and traveling—together.

Directed by Lisa Strum, this tragedy takes the audience on the inexorable and seemingly hopeless journey of Hannah Ballard to find her husband Moses from whom she was separated after her master died and his daughter inherited her and her child.

Salter tells Hannah’s story through a myriad of scenes ranging from 1859 in Prince George’s County MD through Alexandria VA (1861) to a cotton plantation near Atlanta (1865) and back to Montgomery County MD (1870); it’s worth noting that the scene changes were made effortlessly by stagehands dressed in period attire! 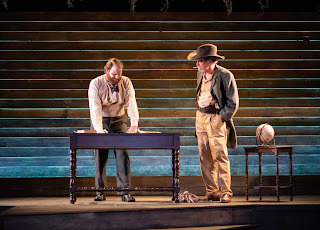 Stellar performances are turned in by six talented actors, one of whom plays seven roles. Karen F. Green’s Hannah appears slight and vulnerable, but she displays a spine of steel standing up to her mistress’s abusive and desperate merchant husband John Bussey, played with appropriate spleen and nastiness by Steven Makropolous (right, with Mark Hofmaier as the Speculator) as a man caught between doing business with the Confederates by engaging in trade with people supporting the Union. He even blames the slaves for the war and sells two female slaves to a speculator for money he needs for his family to survive. Initially portrayed as a malicious opportunist seeking to cement her own place in the Busseys’ slave hierarchy, Brittany A. Davis’s Malinda gains our sympathy when she finally reveals the source of her bitterness. 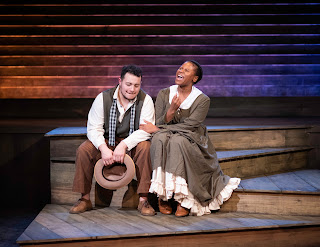 As the two men in Hannah’s life, David Roberts as Moses and LeVane Harrington (left with Brittany A. Davis as Malinda) as Henry Washington also shine. Roberts appears only three times, but each time his performance is suffused with a dignity that is most admirable. Harrington’s charming and effusive Henry wins our hearts as well as Hannah’s. He represents the beacon of hope that there is a meaningful familial life after slavery. The most versatile of the six is Mark Hofmaier who, with a slew of costume, demeanor and accent changes, assumes seven roles from Master to executor to Union soldier to speculator to Freedman to Census Taker, helping to move the plot along and giving voice to various white characters the principals meet along the way.

Scenic designers Christopher and Justin Swader have created a believable time and place with a series of props, which Cameron Filopas has lit to perfection. We always know where we are in the story. Deborah Caney’s costumes are appropriate to the time and status of the characters wearing them while Megan Culley’s sound design adds to the fraught atmosphere, especially evident in the “crowd” scenes where newly freed Hannah and her friends hand out papers advertising the names of the people they seek.

Salter’s dialogue, as ever, is crisp and convincing without being bombastic and preachy. My only caveat is that the three-hour run time is a bit difficult to sit through; I realize that she needed that many scenes to tell the story, but there were times the play felt a bit over written.

Nevertheless, Torn Asunder is a worthy addition to the line-up of plays Luna Stage has produced in the 30 years I have been reviewing them! They have often been timely and thought-provoking, as is Torn Asunder with its connection to families torn asunder by the Nazis during the Holocaust and nearly 1000 children separated from their parents at the U.S.-Mexico border in the 21st century—both of which involve survivors searching for the family members they’ve lost. (Right: Kara Green, LeVane Harrington and Brittany Davis)

Drama has always been a subversive art. That Torn Asunder, set in 1859–1870, can connect us to more recent forced familial separations, is a credit to Nikkole Salter, the director and talented actors, and Luna Stage production team. Once again, this special local professional, black box theater shines a light on man’s inhumanity to man—and the resilience of the victims to reclaim their dignity and sense of togetherness in the face of what would appear to be daunting odds. Do not miss Torn Asunder.

Torn Asunder will be performed at Luna Stage, 555 Valley Road, West Orange, through February 26. Tickets are available on a sliding scale of $10–$80. For tickets, visit www.lunastage.org/torn-asunder online.

Kids Create for Change, Making a Difference in Red Bank

For the next three Saturdays, a diverse group of 22 children ages 8 to 11 from ten different area schools will meet for a program entitled Kids Create for Change.
This arts expression program aims to guide children to find their voices through artist expression and helps them to connect with each other cross cultures to make a difference in their communities.

This program will be presented in partnership with the T. Thomas Fortune Cultural Center whose mission is preserve and further the civil rights and social justice legacy of T. Thomas Fortune through community outreach, education, the arts and public programming.

Assisting in the program will be a number of high school students from the church as well as Ranney School. The sessions will include picture book readings, guest artists, discussion and creative activities. 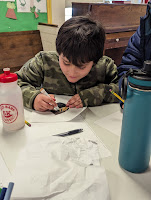 Each participant will receive a keepsake book of the group’s artwork and stories at a celebration event on March 24th which will feature a slide show and Carmen Rubin reading her book, Ashti Meets Birdman Al. This event will be open to all.

Would anyone welcome them?

Theatergoers from throughout North America will choose the winners in The Theater Project’s
THINK FAST Short Play Competition
WHEN: Plays are pre-recorded and broadcast live on March 2, 3 at 7:30 p.m. and March 4 at 2 p.m.
WHERE: Zoom
TICKETS:  $15 and include a link to a live, post-broadcast Zoom meet-and-greet after each performance, where audience members can chat with the actors, directors, playwrights, and event organizers.

Theatergoers from throughout North America will get to experience and participate in live theater—from home— as voters in The Theater Project’s (TheTheaterProject.org) prestigious THINK FAST short play competition, March 2-4.

Eight plays—some submitted from as far away as Seattle, WA—have been chosen as finalists in the THINK FAST competition, a cornerstone in the spring season of The Theater Project, a leading incubator for rising talent and a showcase for new works in New Jersey and beyond.

This is the 10th year for the THINK FAST competition and the third consecutive using the Zoom, ‘vote from home’ format. The event is part of the New Jersey Theatre Alliance’s Stages Festival, the state’s largest annual theatre festival, which provides free and discounted theatre events for all ages throughout the months of March, April, and May.

“By holding this competition via Zoom, we’re able to bring live theater into homes throughout the country and give everyone—including the authors’ friends and family—the opportunity to participate in the voting,” said Theater Project award-winning playwright and THINK FAST coordinator Joseph Vitale.

While there will be several individual awards during the THINK FAST competition, only one play will be chosen as the winner of the $500 Judges’ Pick award.

The prizes, including commendations for best actor, actress, and director, are announced at the Virtual Cocktail Party following the final performance on Sunday at 2 p.m.

An Inspiring Thought for Today

Octavia E. Butler’s science fiction stories and novels tackle weighty subjects such as race, gender, and power, often through the eyes of her disenfranchised protagonists.
Her work influenced the formation of Afrofuturism, addressing modern-day social issues through a technocultural lens. Her stories feature communities built around diverse groups: humans of African, European, or Asian descent, as well as extraterrestrial or hybrid species.
For these communities to survive — and to endure often brutal exploitation — they must overcome their differences. Tolerance, therefore, was a recurrent theme in Butler’s work.
And when she was asked to address the U.N. Conference on Racism, tolerance was her rallying cry: “Tolerance,” she said, “is forever a work in progress, never completed, and, if we’re as intelligent as we like to think we are, never abandoned.”
Posted by Ruth Ross

Six More Weeks of Winter? ❄️ Warm Up With NBPAC