Casting Announced for Shakespeare in the Park Bergen County 2021 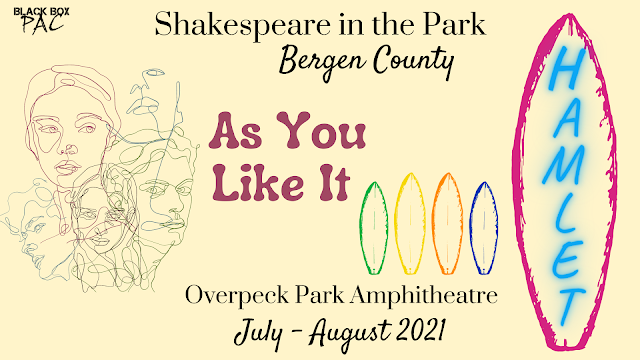 Black Box Performing Arts Center, in partnership with Bergen County, is pleased to announce free outdoor professional performances of Shakespeare’s Hamlet and As You Like It this summer, exclusively at the Overpeck Park Amphitheater!

This will be the fourth year of free summer Shakespeare in Bergen County, brought to you by Black Box PAC, the intimate 501c3 non-profit theater/performing arts school combo located on Palisade Avenue in downtown Englewood.

Performances of Hamlet and As You Like It are free to attend, but audiences should bring their own chairs or blankets.

Surf's up in the classic revenge tragedy! The sun might be out, the waves might be strong, but there is a dark cloud surrounding the surfer prince as he grapples with the recent death of his father. Can he stay balanced on his board and avenge the Surf King’s murder?

How do YOU like it? Uptight suburbia got you down? Escape the court and find freedom in the Forest of Arden! Shakespeare’s famous heroine finds liberty in banishment and Hippies in the woods in this fun romantic comedy with a psychedelic twist.

All the world’s a stage… but the best stage of all is Bergen County’s Overpeck Park Amphitheater, located at 100 Challenger Road in Ridgefield Park, New Jersey! Join us this summer, starting late July through August (full performance schedule including dates and times to be announced soon)!

Shows are free to the public, thanks to the support of our generous corporate and organizational sponsors: The Bristal Assisted Living; Cross River Bank; Davis, Saperstein & Salomon; The Puffin Foundation; Bauer Printing Co.; and Michael J. Pessolano of Friedberg Realtors.

Want to see your company name among the list of arts and culture supporters in Northern, NJ? Please email BlackBoxPAC@gmail.com for more information about sponsorship options benefits!

For further information, please call (201) 569-2070, email blackboxpac@gmail.com, check us out on FB @blackboxpac, or visit www.blackboxpac.com.