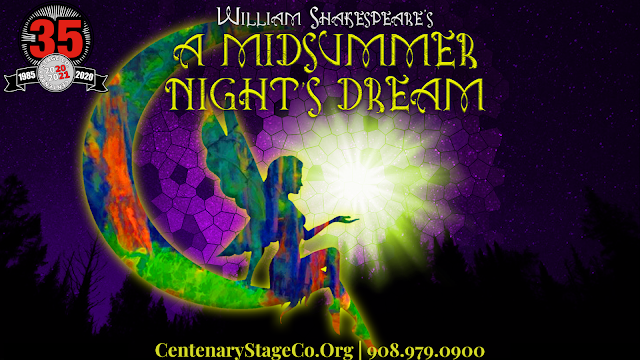 WHEN: April 22 through May 2. Specific dates and times are; Thursdays, April 22 and 29 at 7:30 PM; Fridays, April 23 and 30 at 8:00 PM; Saturdays, April 24 and May 1 at 8:00 PM and Sundays, April 25 and May 2 at 2:00 PM
WHERE: Sitnik Theatre of the Lackland Performing Arts Center, 715 Grand Ave., Hackettstown.
TICKETS: $15.00 for adults, $10.00 for students and children under 12 and $5.00 for Centenary University students. Live stream access links are $10 per link, with only one link needed per viewing device. For more details on how the live streaming works, please visit CentenaryStageCo.org or call the box office at 908-979-0900.
For more information or to purchase tickets, visit centenarystageco.org or call the Centenary Stage Company box office at (908) 979 – 0900. The box office is open Monday through Friday from 1 – 5 PM and two hours prior to all performances. The Centenary Stage Company box office is located in the Lackland Performing Arts Center on the campus of Centenary University at 715 Grand Ave. Hackettstown, NJ.

Shakespeare’s beloved comedy A Midsummer Night’s Dream follows the story of the four brawling lovers, caught in a dispute of increasingly magical proportions; a crew of keen mechanicals, determined to give it their all; and one roguish sprite, hell-bent on causing as much havoc as possible. Young love, cruelly denied, steals into the fairy woods, where all manner of mischief is waiting to meet the lovers and their pursuers. In this dream-like forest, the lives of the mortal and the immortal merge to create an enchanting world of love, magic, and misunderstanding. The NEXTstage Rep. cast will bring Shakespeare’s beloved raucous comedy to life with a brand new, contemporary re-imagining featuring themes from 1990s grunge and other modern eras.

The production is co-directed by Centenary Stage’s own Artistic Director, Carl Wallnau and YAS director, Lea Antolini-Lid. Wallnau has directed numerous productions at CSC including, most recently, Stephen Temperley’s new adaptation of A Christmas Carol this past winter, and Ghost Train by Arnold Ridley last season. Wallnau has also directed world premieres of Inventing Montana, The Tillie Project and The Poetry of Pizza at CSC in addition to several American and New Jersey premieres. In addition to his extensive directorial endeavors, Wallnau also has a long list of onstage credits at CSC including appearing as Scrooge in the aforementioned production of A Christmas Carol and as Willie Clark in last season’s Sunshine Boys. Wallnau also has many additional performance credits regionally.

Antolini-Lid co-directs and serves as Choreographer for A Midsummer Night’s Dream. She has served as the Director for the Young Audience Series as well as producer for the NEXTstage Rep. Summer Musical Theatre Series at CSC for several years. In addition to Antolini-Lid’s extensive performance credits her long list of directorial credits includes the CSC production of Turning by Darrah Cloud as well as summer productions of HAIR and Jesus Christ Superstar.  Antolini-Lid has performed professionally in NYC and in cities across the east coast including, among many, CSC on-stage performances, Antolini-Lid was most recently seen on the Sitnik stage as the Ghost of Christmas Past in the CSC 2021 production of Stephen Temperley’s A Christmas Carol.