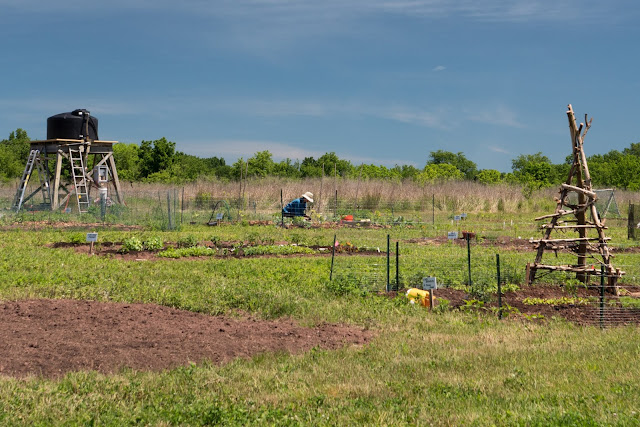 D&R Greenway Land Trust announces that vegetable seeds are already sprouting in the inaugural Community Victory Gardens, nearby the vintage red barn on their St. Michaels Farm Preserve. The vision to provide nearby residents with healthy ways of eating, and support people in need of food security, started as a kernel of an idea ten years ago when the 415-acre Hopewell preserve was created.

D&R Greenway invites the public to visit the preserve to enjoy looking at beautiful trellises and the bounty of plants growing there this summer.  Remember to social distance to keep everyone safe. For more information, contact Deb Kilmer at dkilmer@drgreenway.org.

Farm manager Bill Flemer talks about how this year’s pilot project became a reality, “A few of us were talking earlier this year about how the time had come for a community garden.  With the pandemic keeping people at home, seeking healthy ways to eat and a need for ‘community’, local organic farmers Bob and Steffi Harris and I approached Linda Mead about our idea.”

President and CEO of D&R Greenway Linda Mead reacted with enthusiasm, “We are all hungry for a sense of belonging, being outdoors and living healthy right now. These times hearken back to the Great Depression, when Victory Gardens provided important sustenance for those who lost jobs or were on limited income, strapped for food. I especially liked the suggestion to include ‘Charity Plots’ where gardeners donate plants, time and harvest to support those in need.”

Six of the thirty-two garden plots are reserved for charity. All plots are designated for this pilot year. Hopewell resident Corinne Egner is managing the schedule for gardeners who have donated plants and seed, and who are contributing their time to weed, water and harvest the produce.  As the fruits of their labors ripen, the healthy, local vegetables will be donated to the new nonprofit that has emerged at Hopewell’s Aunt Chubby’s Luncheonette, feeding 30 local families identified by local churches and a doctor.

In an email to the group of gardeners, Marian Labos said, “I likely have some potatoes and tomatoes I can plant in the charity plot. I was a bit enthusiastic with the extra gardening space this year.”  Jennifer Sizoo and her children Hannah and Wyatt offered to take care of three of the plots and help with delivery of the donated harvest.  Other members of the charity team include Bridget Zezinski, Susan Meaney, Burgess Ekman, Kathy Fedorko and Sophie Merrie.  D&R Greenway’s Bill Flemer laid out and prepared all the garden plots by rototilling, providing garden stakes, and turning in compost. The farm field is safe from deer, being inside a fenced area where native plants were grown to restore a Staten Island landfill that holds remains from the 9-11 site in New York City.

What makes these garden plots most unique is the social distancing design and protocol. Plots 15’X15’ (above, left) were designed with 10’ wide pathways in between.  The water tower that D&R Greenway keeps filled is the location of a “sanitizing station” for all gardeners to use. Social distancing rules apply, including wearing “your own gloves” when using any shared tools. “We hope that this pilot year is a grand success,” says Mead, “proving that even in times of severe stress we can creatively solve problems and come together around common ground.” 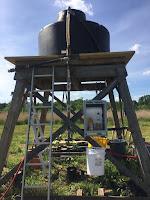 D&R Greenway is regionally adapting to world conditions, while celebrating history and agriculture. Stretching back to World War I,  American citizens were urged to utilize all idle land that was not already engaged in agricultural production—including school and company grounds, parks, backyards or any available vacant lot. A new version of 'War Garden' emerged during the Great Depression and WWII, when Eleanor Roosevelt planted a 'Victory Garden' on the White House lawn. The site of D&R Greenway’s new Community Victory Gardens once served as a farm to provide food for the children who lived at the St. Michaels Orphanage that stood here through both World Wars. Stories continue to emerge that many boys and girls were dropped off at the Orphanage by parents who could not feed them, because of the Great Depression and the Great War.

The original motto for these types of gardens was “Sow Seeds for Victory.” People were urged to “plant, fertilize, harvest and store their own fruits and vegetables, so that more food could be exported to nourish our allies and feed our Homefront.” The growing of food, from the 1930’s on, proved vital to the national mood. In both wars, “amateur gardeners were provided with instruction pamphlets covering how, when and where to sow, and best crops to plant.” Key vegetables in both wars were beans, beets, carrots, peas, tomatoes, squash and cucumbers.

Valerie Meluskey, a veteran Willing Hands volunteer who helps at many of D&R Greenway’s events, is among the pilot year’s crop of gardeners.  She is most excited about having “brought in some tiny plants of heirloom green dragon tomatoes, because they are so tasty!” She has chosen curly-leaf parsley for sturdiness and was given okra by her friend and fellow gardener Prasanthi Kitaru, a native of India. Meluskey “sprinkled coriander seeds here and there, and I hope they come up.” She planted “wildflower seeds from the Sierra Club that I spread around the perimeter.”

Bill Flemer, whose great grandfather started his family’s business Princeton Nurseries, reflects on the value of the effort. He sees this new garden opportunity as “inspiring community responsibility. Twenty-six gardeners are caring for their own sites; volunteers tending the six charity plots.” Flemer marvels that this project “seems to be bringing out the best in our town, working on this together.”

One of the great benefits of farming at St. Michaels Farm Preserve is the view, says Valerie Meluskey. “It’s so pleasant up on that slight hill that looks across fields and over barns. I like being surrounded by land with no modern buildings.”