Controversial, Award-Winning “Pass Over” Up Next At Luna Stage 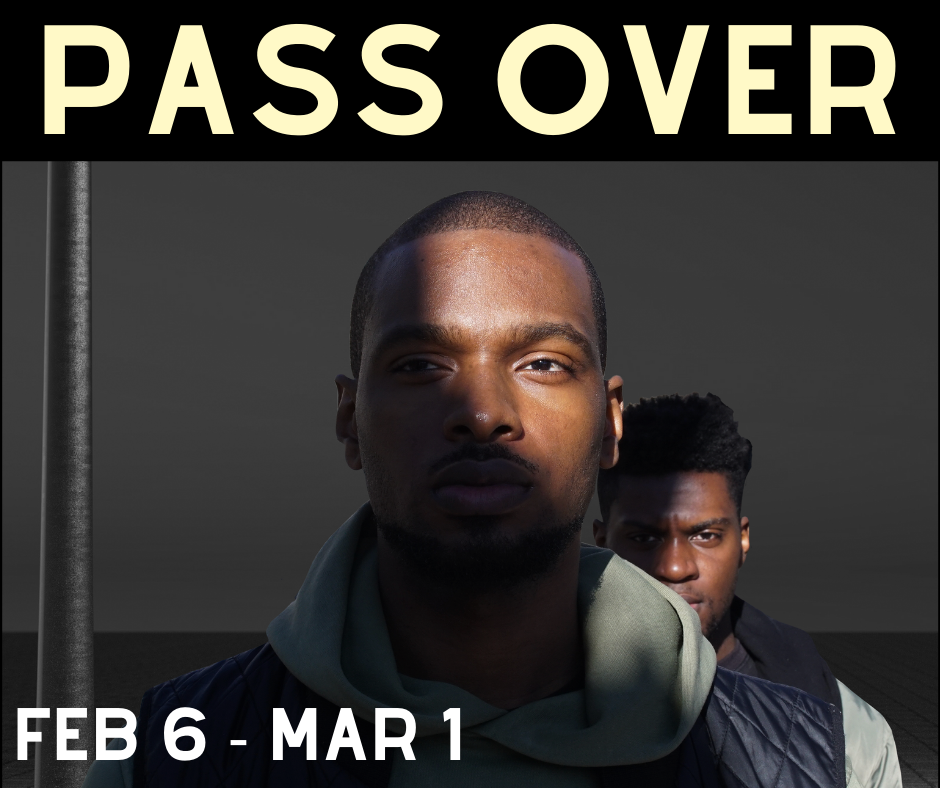 Pass Over
by Antoinette Nwandu
Directed by Devin E. Haqq

Special pre- and post-show conversations with guest experts and members of the creative team are scheduled throughout the run. See the full schedule of events at www.LunaStage.org.

Moses and Kitch chill on the corner talking smack, passing the time, and hoping that today a miracle will come. They stand by a lamppost in a present-day ghetto, but it's also a plantation, and it's also Egypt, a city built by slaves. An ingenious mashup of Waiting for Godot and the Exodus saga, Pass Over exposes the unquestionable human spirit of young black men who dream about a promised land they've yet to find.

Antoinette Nwandu’s searing and poetic new play Pass Over premiered at Steppenwolf in Chicago, where it was filmed by Spike Lee and launched considerable press controversy, then moved to Lincoln Center where it was awarded the 2019 Lucille Lortel Award for Best New Play.

Directed by Devin E. Haqq, Pass Over is a provocative, contemporary mashup of Waiting for Godot and the Exodus saga. Moses and Kitch stand around on the corner talking smack, passing the time, and hoping that today a miracle will come. They stand by a lamppost in a present-day ghetto, but it's also a plantation, and it's also Egypt, a city built by slaves. In this world, the two young black men dream about a promised land they've yet to find.

“This play is a profound comment on white supremacy and the systems of oppression that have continued to stifle, confine, and attack black and brown bodies for centuries,” says Haqq.

“The piece brilliantly packages these themes within the language of poetry, humor, and surprise,” Haqq adds. “I'm blown away by the potential this play has to jolt the hearts and minds of audiences, and inspire dialogue on these issues, which is vitally needed in our current socio-political climate.”

Previous productions of Pass Over have met with considerable controversy. In Chicago, veteran Sun Times critic Hedy Weiss’ review of the World Premiere was met with backlash; Steppenwolf Theatre called her to task for reflecting “deep-seated bigotry and a painful lack of understanding of this country’s historic racism.” At Echo Theater Company in Los Angeles, creative disagreements led to the production’s cancellation just days before opening.

Devin E. Haqq has appeared Off-Broadway at the Barrow Group, Epic Theatre Ensemble, and most recently in the New York premiere of David Harrower's Knives in Hens at 59E59 Theaters (New York Times Critic’s Pick). He has also appeared in numerous regional theatre productions including Fiasco Theatre's Measure for Measure (Actor's Theatre of Louisville) and As You Like It (The Arden Theatre). As an independent filmmaker, Devin has produced four feature films. He made his directorial debut with The Assassin (2007). His film re-envisioning of Shakespeare’s Julius Caesar, Ambition’s Debt, won the Grand Jury Award for Best Narrative Feature at the 2017 American Black Film Festival and the Paul Robeson Award - Honorable Mention at the 2018 Newark Black Film Festival. Devin is a graduate of the Alabama Shakespeare Festival’s MFA program.

Antoinette Nwandu is currently under commission from Echo Theater Company and Colt Coeur. Her work has been supported by The MacDowell Colony, The Sundance Theater Lab, The Cherry Lane Mentor Project (mentor: Katori Hall), The Kennedy Center, P73, PlayPenn, Space on Ryder Farm, Southern Rep, The Flea, Naked Angels, Fire This Time, and The Movement Theater Company. She is an alum of the Ars Nova Play Group, the Naked Angels Issues PlayLab, and the Dramatists Guild Fellowship.

Luna Stage develops and produces vibrant plays about local and global experiences. We bring our communities together for artistic events that spark conversations, build understanding and inspire change. Firmly rooted in New Jersey’s Valley Arts District—a crossroads of cultures—we celebrate the diverse voices that surround us.

Luna is committed to eliminating barriers to participation and nurturing the next generation of audiences and artists. In addition to its artistic season, the company offers classes for children and adults, as well as developmental opportunities for new work.

Luna Stage has contributed to the development of over 100 new works for the stage, earning a reputation for artistic excellence. Luna’s unique approach to producing, as well as the work itself, fosters an environment of inclusivity, understanding and infinite possibility.