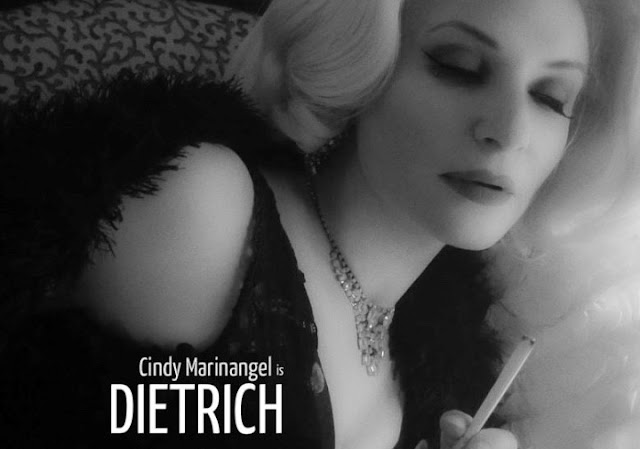 Dietrich, a compelling and acclaimed one-woman play that brings to life the iconic German actress Marlene Dietrich,  is based on a true story. Set in 1960, the play takes place on the evening the actress returned to the Berlin stage for the first time since fleeing the Hitler regime of the 1930’s. Inside her dressing room at the Tatiana Palast Theater, Dietrich weighs whether to go through with the live performance despite threats on her life by Nazi sympathizers who resented her for having spent much of World War II entertaining American soldiers on the front lines. To them, Dietrich is a turncoat; a traitor who deserves to be shot and killed on stage.

Dietrich (formerly known as Marlene) celebrated its world premiere at the Brickhouse Theatre in Los Angeles (Produced by John Lant – Carnegie Hall), debuted in New York at the Hudson Guild Theatre (Winterfest), and was selected as a finalist for the NY New Works Theatre Festival at the Acorn Theatre. This play-with-music next enjoyed successful limited engagements at The Triad Theatre, a celebrated Off-Broadway house.

Marinangel (born in Westwood, New Jersey) is an international entertainer, a Lifetime Member of The Actors Studio and a graduate of the Chicago Second City Conservatory. Marinangel is an avid ballroom dancer and animal rights activist.

Manus is a playwright, journalist and novelist. He is a member of the Playwright/Directors unit of The Actors Studio. His most recent plays are “Joe and Marilyn: A Love Story,” “Frank and Ava” (now a motion picture) and “Who Killed Comrade Rabbit?”