REVIEW: “ACOUSTIC” VERSION OF “A CHRISTMAS CAROL” DAZZLES ONCE AGAIN AT STNJ 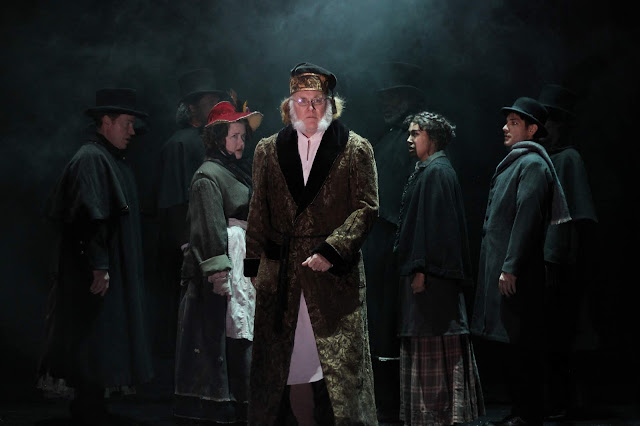 Over the past 14 years, this is the third time I have reviewed Neil Bartlett’s version Charles Dickens’ novella A Christmas Carol at the Shakespeare Theatre of New Jersey—the first, in 2007 and the second, in 2011. As I approached the current opening night performance of the old holiday chestnut, I found myself wondering would be the same and what would be different.

I am happy to report that this version of A Christmas Carol, adapted for the stage by Neil Bartlett and stunningly directed by long-time company member Brian B. Crowe, is like nothing you’ve ever seen before. This production still sports “no music other than Christmas carols, no special effects but fog and a giant puppet, and no words other than those penned by Dickens himself,” as I wrote in 2011. This time out, Brian B. Crowe directs Bartlett's adaptation of the iconic tale with freshness and élan.

What else stays the same? Well, along with the actor playing Ebenezer Scrooge, nine actors play 50 roles— from beggars to swells to spirits—seamlessly and skillfully, while providing evocative sound effects that include ticking clocks, scratching pens, clinking coins, a light going on and off, and a creaking stove door!

So, what’s different? The answer lies in the cast. Of the 10 actors, nine are company veterans with only one making her STNJ debut. 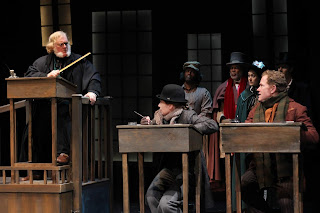 Interestingly, Ames Adamson (Scrooge; top) has appeared in the two previous STNJ productions: in 2007 as the Ghost of Christmas Past, whose revelation of the sadness of Scrooge’s youth cracks the old man’s crusty exterior and in 2011 as Christmas Present and, wait for it, a Turkey, so it’s gratifying to see him assume the starring role. Onstage for the entire two hours, he turns in a masterful performance without over-the-top curmudgeonry and maudlin sentimentality. Even when the Ghosts appear, our eyes never wander from him. Yes, his downturned mouth and deep frown convey his mean spiritedness, and he spits out "Bah" like a lead bullet. To accentuate his nastiness, he responds to his nephew’s kind invitation to Christmas dinner, barking, “I’ll see you in Hell! I’ll see you dead!” And his three clerks rear back in unison as he berates them for their expressions of holiday spirit. Best of all, his transformation as the specters appear is believable because Adamson gives us a glimpse of how lonely this old man really is. (Above in the foreground from left to right: Ames Adamson as Ebenezer Scrooge, Emma O’Donnell and Clark Scott Carmichael as Bob Cratchit.) 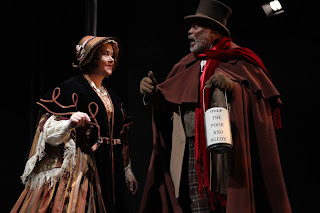 In a kaleidoscope of rotating roles, large and small, every actor shines. In his white satin suit and cloak, versatile Quinton McCuiston is a regal Ghost of Christmas Past and later, a winning, if unexpectedly older, Tiny Tim. Raphael Nash Thompson’s Mr. Fezziwig is warmly expansive in both girth and spirit; Alison Weller’s Mrs. Fezziwig is equally as cheery. Both bring a warmth to the chilly winter environment. (Above, right: Alison Weller as Portly Gentlewoman and Raphael Nash Thompson as Portly Gentleman, collecting alms for the poor.) 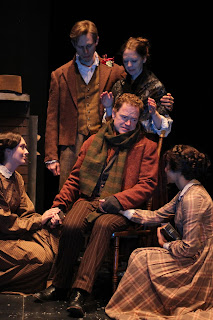 As Scrooge’s boyhood friend Dick Wilkins and Bob Cratchit, Clark Scott Carmichael is appropriately boisterous and subdued; he even makes a tasty-looking turkey! Emma O’Donnell does yeoman’s duty as a clerk, Scrooge’s sister Fan and a no-nonsense Mrs. Cratchit, complete with Scottish brogue. Billie Wyatt shines as Scrooge's fiancée Belle, making his neglect of her all the more poignant. Lindsay Smiling’s Ghost of Christmas Present is as jovial as his Marley’s ghost is scary. Garrett Lawson and Emily Michelle Walton adeptly play a variety of roles, most notably that of Scrooge’s earnest, long-suffering nephew Fred and his lovely wife. In addition to acting, the company’s lovely voices provide much of the play’s music and reinforce the holiday atmosphere. (Left L-R: Emily Michelle Walton as Martha Cratchit, Garrett Lawson as Peter Cratchit, Clark Scott Carmichael as Bob Cratchit, Emma O’Donnell as Mrs. Cratchit, and Billie Wyatt as Belinda Cratchit.)

Dick Block hasn’t so much as replicated the previous spare but evocative sets as tweaked them a bit. Sliding panels still simulate a Victorian street scene, and movable doors and jambs, a bed, chairs and tables and a stove smoothly move the action from place to place and scene to scene. But the special effects never take precedence over action and dialogue; they provide a spooky backdrop against which the action unfolds. Andrew Hungerford’s atmospheric lighting adeptly directs the audience’s focus, especially in scenes where the ghosts stop the action so that Scrooge can react or time pass. Steven L. Beckel’s sound and Robert Long’s musical direction add to the ghostly atmosphere while Summer Lee Jack’s colorful costumes evoke the mid-19th century in which Dickens lived and wrote.

For theatergoers who associate Christmas with Rudolph the Red-nosed Reindeer, Martha Stewart and shopping, it may come as a bit of a surprise that A Christmas Carol was written as a scary ghost story. Yet despite its scarier aspects—most notably the appearance of ghostly spirits and the projected death of Tiny Tim—it remains great family entertainment (although perhaps not for the little ones). An added plus of The Shakespeare Theatre of New Jersey’s production is the closeness of the audience to the action; it’s a great opportunity to introduce the kids to the magic of theater.

The story is a cautionary tale of what industrialization can do to those who are less well off, a frequent theme in Dickens' work, and at a time when the poverty rate is rising in the United States and more people find themselves lacking access to health care, A Christmas Carol continues to speak to modern audiences. Although the story seems to have little to do with the original Christmas, its twin themes of redemption and hope are most appropriate to the holiday season—whatever your religious persuasion might be.

When Bartlett’s adaptation was first performed in London, The Guardian wrote, “This is one of those rare and festive offerings for which no adult will need the excuse of a child in tow to book a ticket.” The same is true here; come alone or bring a child; this innovative take on A Christmas Carol is a fantastic opportunity for families and people of all ages to experience this classic tale in an entirely new way.

A Christmas Carol will be performed at the F.M. Kirby Shakespeare Theatre, 36 Madison Ave., Madison (on the campus of Drew University) through December 29. For information and tickets, call the box office at 973.408.5600 or visit www.ShakespeareNJ.org online.