THE LOSS OF A COLLEAGUE, RICK BUSCIGLIO 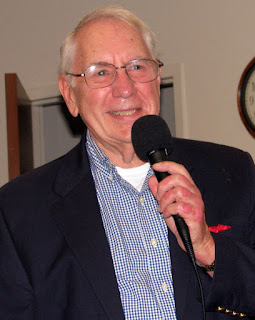 It is with great sadness that I commemorate my fellow blogger and critic, guest reviewer to this blog and dear friend Rick Busciglio, who passed away last night after a shockingly brief bout with pancreatic cancer.

Over the years, I would look for Rick and his lovely wife Betty at theatrical events. Just seeing them there gave me great joy. We’d share opinions about plays we’d seen, joke about our children and grandchildren, and sometimes share a drink at an after play party. He was an integral part of the local reviewing scene.

Rick had a long career in show biz. Before he started blogging, he was active in broadcasting. He lectured on cruises, engaged in all kinds of public speaking (mostly about the entertainment field), was an editor and videographer. From 2001 to just recently, he wrote the NJ Footlights (www.NJFootlights.net) blog. I first met him as the press contact for the Chester Theatre Group, on whose board he sat.

Rick was generous about sharing reviews he wrote about shows I could not get to. I was glad to post them, as he did mine.

A true stand-up guy, Rick was a wonderful husband, father, grandfather and friend. He will be sorely missed by his family, friends and the local theater community.