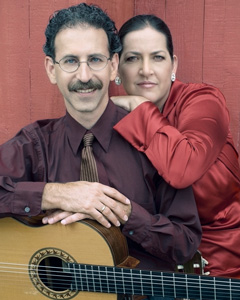 WHEN: Sunday, December 15, at 3:00pm
WHERE: Saint Andrew’s Episcopal Church, 50 York Street, Lambertville
TICKETS: donations of $20 per person are suggested

This special concert celebrates the rich musical tradition of the Christmas Season.  The program includes music from their critically acclaimed  CD, A Christmas Pastorale - 600 Years of Carols, Chorales, Preludes & Pastorales for Two Guitars, featuring music from the Renaissance, Baroque, and Classical eras with works by Bach, Handel, Mendelssohn, Pachelbel, Brahms, Corelli, and Luther, among others.

Hailed as a “revelation to hear” by The Washington Post, the Newman & Oltman Guitar Duo’s phenomenal musicianship places them solidly at the top of their field. Their innovative programming, matchless technique and ensemble precision, combined with their commitment to expanding the repertoire for guitar duo, make them a chamber ensemble of world renown.

Newman and Oltman’s concert tours have taken them to world cultural capitals and premiere venues across five continents, the Caribbean, and South Pacific. In addition to their international engagements, they have performed at Carnegie Hall, aboard the Queen Elizabeth II, Caramoor and the Grand Canyon. The Duo has demonstrated extraordinary stylistic breadth in their collaborations with such diverse artists as composer/conductor Marvin Hamlisch and the Pittsburgh Symphony, mezzo-soprano Frederica von Stade, fiddler Eileen Ivers, pianist Clarice Assad, violinist Tim Fain, and the ETHEL, Calder, and Turtle Island string quartets.

Newman & Oltman celebrated the world premiere of a new work, El Libro de los Seres Imaginarieos, written and dedicated to them by renowned Cuban composer Leo Brouwer in 2019.  El Libro and selections from Beatlerianas are featured on a new recording of Brouwer's works, performed by Newman & Oltman and slated for release early next season.  Highlights of recent and upcoming performances include the world premiere of Concierto Buenos Aires composed for the Duo by Nuevo Tango Master Daniel Binelli with l’Orchestre de l’Opéra de Reims in France.  Following on the success of the concerto’s French debut, the Duo “charmed the Ferguson audience with phenomenal musicianship” (Gazette Journal) when they performed it with the Virginia Symphony. This summer Michael and Laura returned to teach and perform at the Lanciano International Guitar Seminar in Abruzzo, Italy where they are co-artistic directors.  They have also performed as guest artists and master class presenters at the Camino Artes Guitar Workshop in Palencia, Spain and at the Festival de Violäo in Porto Alegre, Brazil.

Through their groundbreaking new music-commissioning program, Newman & Oltman have built a unique repertoire of works for two guitars by composers such as Paul Moravec, Augusta Read Thomas, Lowell Liebermann, Dušan Bogdanovic, Arthur Kampela and Roberto Sierra. Fanfare Magazine hailed the Duo’s latest CD, Music from Raritan River as “top notch” and “a winner all around.”  The recording features a collection of world premieres commissioned by the Duo over the past decade.  Their artistry has also been captured on nearly a dozen other acclaimed recordings and has been recognized by grants and awards from the National Endowment for the Arts, Chamber Music America and ASCAP.