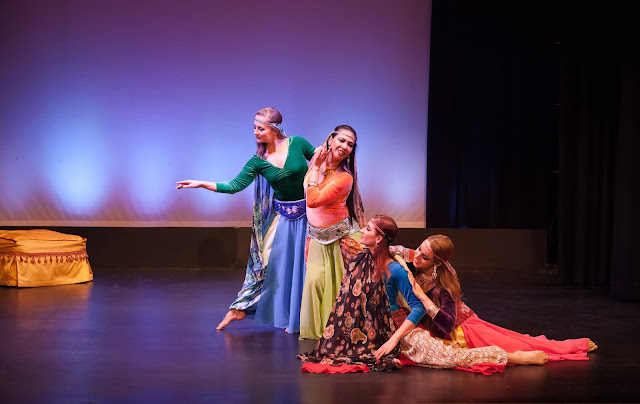 Painters of the 19th century art academies of Europe were fascinated by the landscapes and the people of North Africa and the Middle East, and most especially, the culture and way of life in these lands. Mosaic Dance Theater Company brings some of these paintings to life through traditional and interpretive styles of Middle Eastern dance in Beyond the Image: Dancing Orientalist Art to Life.

Napoleon’s Egyptian campaign in the final years of the 18th century drew the eyes of the world not only to his army’s unsuccessful military exploits, but also to the successful discovery and cataloguing of the incredible artifacts uncovered by his other army—archeologists, scholars, and engineers. Soon tourists flocked to North Africa, and with them, the artists, hungry for new subjects and locales. The life and culture of this part of the world became popular themes among academic painters of first half of the 19th century.

With choreography by Samara Adell, MDTC’s Artistic Director for Dance and Special Guest Artist Jehan Kamal, Beyond the Image re-imagines a moment in time captured on canvas, and brings it to life through dance.  Themes explored, as inspired by these paintings include life in the harem, a village marketplace in North Africa, and Ancient Egypt.  In addition, the concert includes an adaptation of The Paradise of Children by Nathaniel Hawthorne. Hawthorne’s retelling of the myth of Pandora’s box, adapted and directed by Morgiana Celeste Varricchio, is presented in MDTC’s signature style of dance/story theater.

The production will include a pre-show lecture on Orientalist art led by guest lecturer Dr. Frédérique Joseph-Lowery, and a post-show Q&A with the cast.

Based in Glen Ridge, N.J., MDTC is dedicated to the dance and folkloric traditions of the Mediterranean region. The Company’s original dance, theater, and educational programs celebrate the rich diversity of cultures of the lands of North Africa, the Middle East, and southern Europe. The dances and music, the stories and myths, and the history and legends of this fascinating area form the wellspring of inspiration for MDTC’s creative vision.  Founded in 2003 by Producing Artistic Director Morgiana Celeste Varricchio, this critically acclaimed company is known for its artistry and authenticity, not only in creating the original works that comprise its repertory, but also in faithfully researching their origins to ensure cultural integrity.  Touring nationally to performing arts venues, universities, schools, and community institutions, the Company is the recipient of the Sunshine Award for its contribution to the performing arts, recognized by NARAS (National Academy of Recording Arts and Sciences) and the United Nations.

This program is made possible in part by funds from the New Jersey State Council on the Arts/Department of State, a Partner Agency of the National Endowment for the Arts and administered by the Essex County Division of Cultural and Historic Affairs, and has been proudly supported by a grant from Investors Foundation.