HANDEL’S “MESSIAH” TO BE PERFORMED IN MORRISTOWN & MADISON THIS WEEKEND 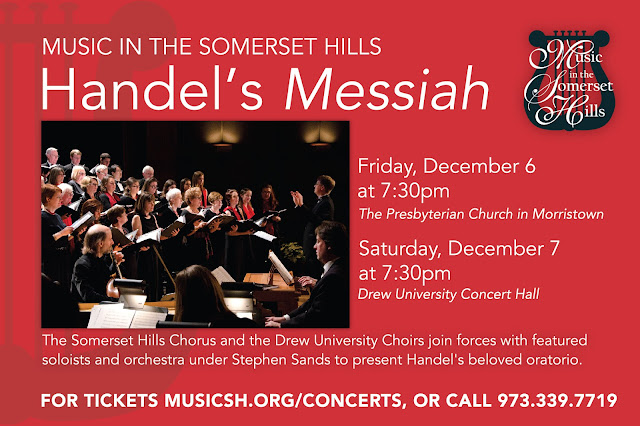 The Somerset Hills Chorus will perform Handel’s much-loved oratorio with professional soloists and orchestra. Run time is 2.5 hours with intermission.

Everyone knows that George Frideric Handel wrote the music for Messiah, but not many people know who wrote the libretto. Charles Jennens was the author—a wealthy patron of Handel’s, whose financial support had played a part in the staging of almost every Handel opera and oratorio since 1725.

Now, in 1741, Jennens sent him what appeared to be (and what, indeed, was) a “ready-made” libretto for a new oratorio—“a meditation of our Lord as Messiah in Christian thought and belief.” So perfect was the libretto that Handel composed his score without making any significant change in the words.

First heard in Dublin in 1742, it was repeated a year later in London (the occasion when King George II is believed to have stood during the Hallelujah Chorus—a custom still preserved at MISH performances).

On December 6 (at Presbyterian Church in Morristown) and December 7 (at Drew University Concert Hall) Stephen Sands conducts the Somerset Hills Chorus and the Drew University Choir, with professional soloists.