Now as we creep into the Halloween season, Hudson Shakespeare Company of Jersey City, returns with 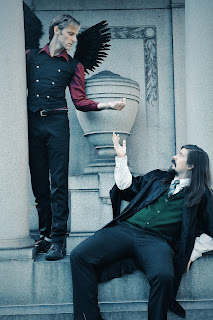 The story of Doctor Faustus is a well-known story of a man who sells his soul to the Devil for ultimate knowledge and power but is presented here in an over looked gem from Shakespeare’s period, written by a rival playwright and his possible collaborator, Christopher Marlowe. 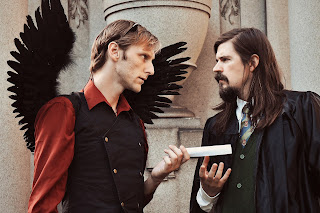 Doctor Faustus (Zach Hendrickson) has been a scholar and professor at the University of Wertenberg, Germany for many years and has mastered all areas of study from medicine to the law and religious studies. Now he seeks the ultimate challenge of delving into the occult so he can learn the true mysteries of the universe and become master of it.

Clandestinely, he employs the help of two mystics simply known as Valdes (Sabrina Fara Tosti) and Cornelia (Ashley Robyn Patten) to assist him. Faustus is instructed to conduct a séance to summon Mephistopheles (Sean P. McCullough).

Mephistopheles, with horns and wings, dramatically appears and informs Faust all that he desires can be obtained if he signs a contract with Lucifer. Once signed, Mephistopheles will become his personal servant conjuring anything and taking him wherever he wants. Faust, ever the lawyer, writes up his version of the agreement and the bond is sealed.

Mephistopheles creates visions of sex, riches, and desires but Faust’s main interest in knowing the nature of Hell, and the nature of the existence constantly quizzing the frustrated demon.

The pair go traveling around the world from Rome to Turkey and other points becoming renowned as a mystic however, even as Faust enjoys his new found fame, he begins to question his contract. His own personal Good Angel (MadisonWright) and Bad Angel (Arielle Legere) literally fight for Faust’s soul. As the years pass and each magical display occurs, a physical toll is taken on Faustus. Can he repent in time and save himself or is bound down the path he has chosen?

“The act of selling of one’s soul for personal gain is an ever popular screen trope that even predates Marlowe’s play, but this version presents Faust as very human as opposed to a mustache twirling villain. He has a genuine curiosity of what he can’t learn in books and continually questions the demons and angels that surround him about what they are and what it means to be good or evil. The show presents a great picture of a man who’s full of regret, has humor, arrogance, and wit, flaws and all mixed with a high level of theatricality,” said Ciccarelli