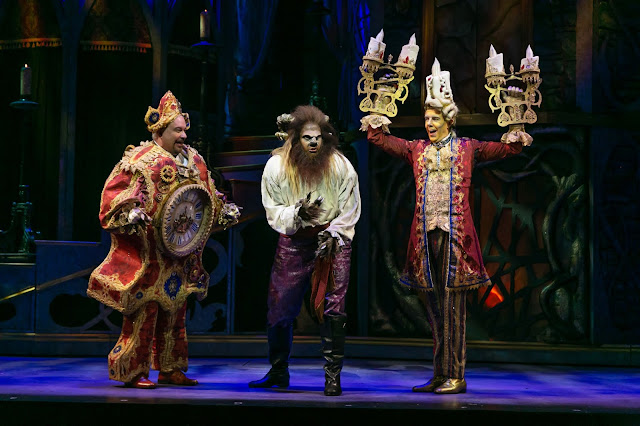 Fresh off the success of the intimate, quirky musical Bennie & Joon, the Paper Mill Playhouse closes out the 2018-19 season with a spectacular (from the root, spectacle) Beauty and the Beast, proving once again the versatility of this venerable theater so central to New Jersey’s drama scene. While the current production doesn’t transcend or deviate from the recent Broadway version, this Beauty and the Beast provides theater-goers with an enjoyable experience—and the perfect way to share the gift of theater with your children, grandchildren, nephews and nieces, and younger friends! (Above L-R) Kevin Ligon, Tally Sessions and Gavin Lee) 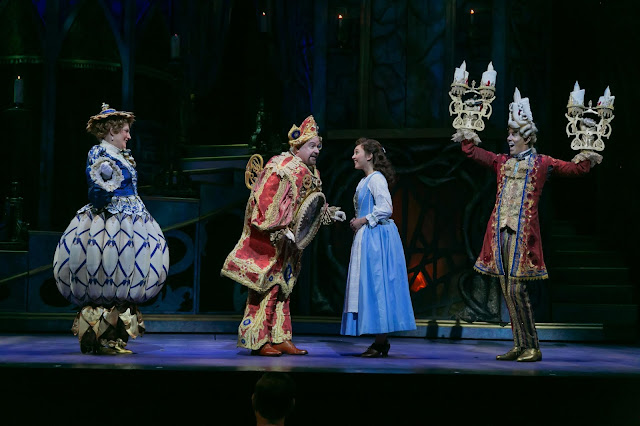 In case you missed the Disney cartoon, live-action film and the Broadway production, this “tale as old as time” (as the song says), based on a fairy tale penned by French novelist Gabrielle-Suzanne Barbot de Villeneuve and published in 1740, involves a handsome prince cursed for spurning an ugly woman and turned into a ferocious beast. When a bookish young woman, spurning an obnoxious, conceited suitor, comes seeking her eccentric inventor father who has lost his way in the forest and has been captured by the prince, she exchanges places to become the prince’s prisoner and eventually looks behind the ugliness to find the real man and fall in love with him, thus freeing him from the curse. Along the way, she meets and is helped by a dancing/singing candelabra, clock, mop, teapot and wardrobe, all servants of the prince and collateral damage to the witch’s curse. (Above L-R: Stacia Fernandez, Kevin Ligon, Belinda Allyn and Gavin Lee)

If you are looking for well-developed, three-dimensional characters, this show is not for you. Most of the characters are caricatures, although we are given brief glances of their humanity from time to time. What’s evident onstage is the fine production values and super-talented cast having a great time telling a raucous, sometimes scary, tale where, in true fairy tale fashion, they “all live happily ever after.”

Mark S. Hoebee, more noted for being Paper Mill’s Artistic Director, displays his directorial chops, moving large groups of people around the expansive playhouse stage, changing scenery smoothly and quickly, and maintaining the infectious humor and glimpses of pathos so there are no dead spots in the action. Best of all, he’s assembled a wonderful cast to tell the tale. Belinda Allyn is a marvelous Belle (above, with Sessions), a winsome and winning self-described bookworm with spine; her feistiness is admirable. As village pretty boy Gaston, Stephen Mark Lukas is appropriately obnoxious; conceit drips from his lips every time he opens his mouth. While Tally Sessions’ Beast lumbers around in a heavy headdress, he manages to lament his lot and express his yearning for love (and Belle) in a beautiful baritone. 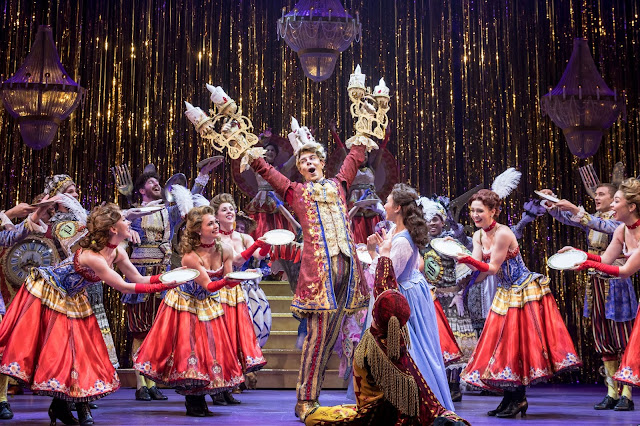 Lending tuneful comedic support are Gavin Lee as Lumiere (above, center), the candelabra (although his French accent was so thick in the beginning that I had difficulty understanding him at times); Stacia Fernandez as the motherly teapot, Mrs. Potts (accompanied by Gianni David Faruolo as her son, the teapot, Chip); Jenelle Chu as the dancing dust mop Babette; Kevin Ligon as the imperious butler-turned-clock; and Donna English as the Madame de la Grand Bouche transformed into a wide wardrobe—her operatic voice shook the auditorium’s rafters! This sestet had a grand time with the show’s boisterous, big number, “Be Our Guest.” 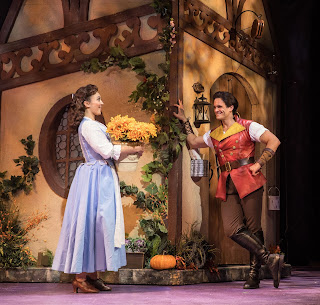 Perhaps, however, the largest, most monumental cast member is the prince’s castle. Yes, a scenic element almost becomes the star of the play! Kelly James Tighe has designed a crag-like edifice that glides silently forward and backward and revolves to reveal various parts of the castle, from dungeon to Belle’s boudoir to the prince’s study. The forest, too, appears ominous and dark, in stark contrast to the village square and café. The seamless scene changes approximate the fade out/fade in device of film, much to the audience’s delight. 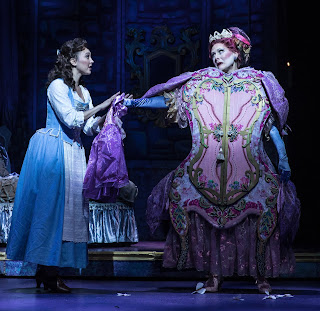 Beauty and the Beast is but one in a long line of adaptations of old, familiar tales, but in true Disney fashion (and Paper Mill interpretation) fleshes them out with great music (by Alan Menken), witty lyrics (by Howard Ashman and Tim Rice) and a straightforward book (by Linda Woolverton). Add to that a very talented cast filled with vim and vigor, polished staging and a sense of fun and you have a bang-up ending to the 2018-2019 season and a worthy experience to share with your (young) family and friends. There’s nothing like a live performance to get them hooked on theater!

Beauty and the Beast will be performed through Wednesday, July 3, at the Paper Mill Playhouse, 22 Brookside Drive, Millburn. For information and tickets, call the box office at 973.376.7676 or visit www.PaperMill.org online.

NOTE: Due to popular demand, four performances have been added to the performance schedule. The limited engagement will now conclude Wednesday evening, July 3, 2019, at 7:00pm. Paper Mill Playhouse will also present an autism-friendly performance of Disney’s Beauty and the Beast on Wednesday, June 26, at 1:30pm. This performance is designed specifically for people on the autism spectrum or with other developmental disabilities and their families.

Photos by Evan Zimmerman for MurphyMade.