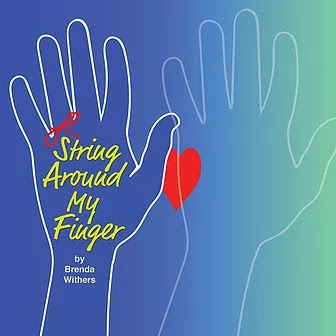 If a miscarriage can seriously affect a marital relationship, just imagine the havoc it can wreak on an as-yet-unmarried couple—especially if their wedding is predicated on an unplanned pregnancy. Add to this fraught situation a lack of health insurance, guilt over not being too thrilled about the coming baby, an insightful, albeit a bit wacky, older patient, a calm physician’s assistant and a bossy sister who thinks she has all the answers, and you have Brenda Withers’ thought-provoking, bittersweet comedy drama, A String Around My Finger, now closing out the season with its New Jersey premiere at Dreamcatcher Rep in Summit. 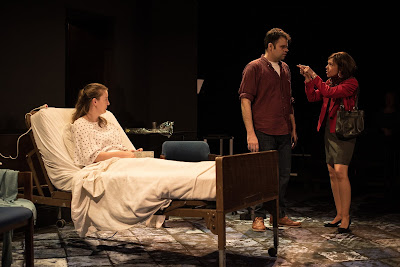 Clark Carmichael’s masterful direction focuses on two problems facing Emma and Kip: how to pay for the hospital bill and, ultimately, where to go from here. Do they cancel their wedding and use the returned deposits to pay for health care? Do they stay together? Does Kip let his sister Lisa bully him into dodging a bullet and abandoning the relationship altogether? And what can elderly Mrs. Rizzo and very calm PA Dave Fletcher offer to assuage the situation?

Brianna Kalisch’s Emma is so fragile that we’re afraid she’ll break onstage. At one point, she becomes physically ill when Lisa hurts her feelings. Even when she gets out of bed (which isn’t often), she walks gingerly, unsure of the ground beneath her feet. This uncertainty becomes manifest in her supposition that her lack of preparedness and desire for a child may have caused the miscarriage. She is a walking bottle of guilt. As Kip, Dave Maulbeck (above, center wit Kalisch and Trangucci) is surer of their relationship; he goes to bat for Emma in the face of his sister’s disrespect for her. He vocally disagrees with Emma about the cause of the miscarriage, valiantly fighting to preserve their relationship. As he stands up to two very persuasive women in his life, we want to give him a standing O! 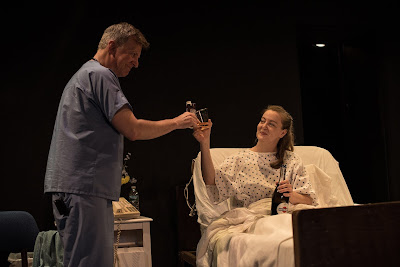 Harriett Trangucci has the unenviable role of Lisa, the villainess of the play. Brittle, bossy, she flouts rules about using cellphones in a hospital (and goes on about their banning on airplanes too), stomps around when challenged and orders everyone around—even people she doesn’t know. Trangucci’s skill, however, allows her character to have an epiphany that turns our sympathy in her favor, not an easy task in the wake of her previous behavior. 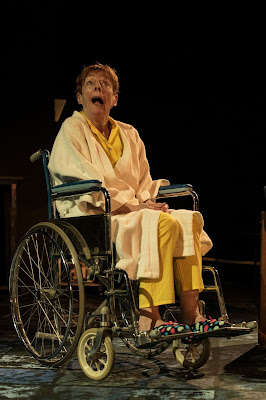 Two other Dreamcatcher Rep veterans round out the cast. Scott McGowan’s calm demeanor as PA Fletcher (above, left, with Kalisch) is a welcome antidote to the clamor of the other three characters. He’s so laidback that he’s on the edge of comatose. Nevertheless, he’s not above letting Lisa have it about her “illegal” cellphone use, arguing that the ban is not because it’s unsafe but that it’s disrespectful to patients and hospital staff. And Noreen Farley (left) has a lovely turn as elderly Mrs. Rizzo, who loves Frank Sinatra and observes that music is “something you’d miss” if it weren’t around. When she warbles the familiar “Three Coins in the Fountain,” we’re drawn into her mindset; while appearing rather batty, her dependence on music to get through difficult situations bears fruit in a tense scene between Fletcher and Lisa, with a sweet result.

Dreamcatcher Rep is one of the gems of professional theater in the area. Their knack for finding new plays and performing them as an ensemble make them a company to be sought out by lovers of good theater. A quiet study of relationships, their fragility and the choices we make to save (or abandon) them, A String Around My Finger is a play you won’t forget. After all, that’s why we tie a string around our finger, isn’t it? Well directed, well produced and beautifully acted, this production will leave you wondering what happens to Emma and Dave and hopeful for their future.

A String Around My Finger will be performed through May 12 at the Oakes Center, 120 Morris Ave., Summit. For information and tickets, visit www.dreamcatcherrep.org or call the box office at 908.514.9654.