GUEST Review: Three Cheers for “1776” at the Barn Theatre in Montville

A longtime resident of Parsippany, Sherman Edwards, was a composer, lyricist, musician, and schoolteacher. As a composer he wrote the scores for several Elvis Presley movies. as a composer and musician he worked with such bandleaders as Benny Goodman, Tommy Dorsey and Louis Armstrong. Today, Edwards, who died at only 61 in 1981, is best remembered for the one musical for which he wrote both the music and lyrics, 1776.”The playwright was Peter Stone. 1776 opened on Broadway in 1969 winning the Tony for “Best Musical.” The film version was released in 1972.

Now, just a few miles from where his former North Beverwyck Road home was located, 1776 is being impressively staged at the Barn Theatre in Montville. This is a robust, slightly bawdy, highly entertaining production that might more accurately been titled “The Birth of a Nation.” The plot, of course, centers on John Adams, Benjamin Franklin and Thomas Jefferson as they attempt to convince the members of the Second Continental Congress seated in Philadelphia to vote for independence from Great Britain and sign the Declaration of Independence thus establishing the new nation, “The United States of America.” 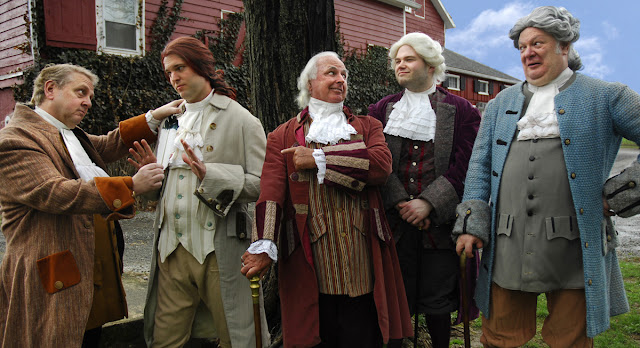 Director Roseann Ruggiero has assembled an outstanding cast of 24 men and two women, led by Joe Elefante with a star turn as John Adams. Michael Foley is superb as Benjamin Franklin. He nicely displays his dual passion for liberty and female companionship (randy…a better word?), Jeffrey Dopson has fun as the spirited Richard Henry Lee of Virginia, Brian Eller is excellent as John Dickinson, the strong advocate for loyalty to the British Empire and the preservation of slavery in the southern colonies, Brad Bebout is fine as the great Boston patriot and president of the Congress, John Hancock. The two fine voiced ladies are Adelaide Prekopa as Martha Jefferson and D’Angelique Dopson as Abigail Adams.

If you have never seen a version of the play, we should note that it is not a Disney sanitized portrayal of the Founding Fathers. These are not “sanctimonious orators prone to dramatic proclamations of the glories of democracy.” You will be surprised by the humor, mild profanity and outright bawdiness in some of the scenes. For instance, Thomas Jefferson tells John Adams and Benjamin Franklin that he has writer's block and can't come up with anything for the Declaration of Independence because he "burns" for his wife, whom he has not seen in six months. Adams expresses similar yearnings, and Franklin then makes a joke about how at his age it's best to stick to writing because "the pen is mightier than the sword." New Jersey is prominent, particularly when a letter to the Continental Congress from George Washington reports on the general drunkenness of militia in New Jersey, and how their demand for prostitutes is greater than the supply of prostitutes in New Jersey, and that many have contracted venereal disease.
The play contains 13 musical numbers, with “Sit Down, John” (Adams and Congress); “Till Then” (Adams and Abigail); “But, Mr. Adams” (Adams, Franklin, Jefferson, Sherman and Livingston) and “Is Anybody There?” (Adams and Thomson)  particular standouts.

The principal take-away from this rousing depiction of the decision to revolt is that nothing has changed....even then our leaders were all too human. They were just as divided, just as prone to good and evil, just as irrational of temper as the politicians of today.Three cheers for cast and crew.