One of the pleasures of the local summer theater season is a production by the Light Opera of New Jersey. Whether it be Gilbert & Sullivan in Pleasant Valley Park or Broadway musicals performed at Morristown-Beard School (one year) or the South Orange Performing Arts Center (the past three years), a production by this talented troupe is always a treasure. This year is no exception. 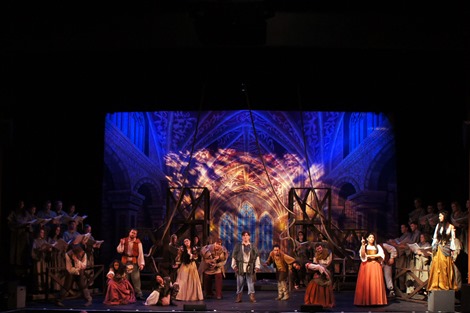 Based on Disney’s 1996 animated film version of Victor Hugo’s epic 1831 French Romantic/Gothic novel, the Light Opera of New Jersey’s production of The Hunchback of Notre Dame uses the same script by Peter Parnell, music by Alan Menken and lyrics by Stephen Schwartz as did the Paper Mill Playhouse in 2015. And, despite lacking the same budget as the Paper Mill, the current production is every bit as lavish and elegant. Under Jeffrey Fiorello’s intelligent direction, this heartrending, thought-provoking and highly entertaining show explores the dark themes of what it means to be an outcast, the destructiveness of sexual obsession and the redemptive power of love. 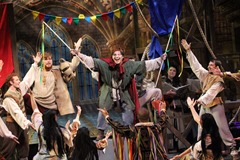 The hunchback of the story is Quasimodo (his name means "half-formed"), the "monster" offspring of a gypsy mother and Jehan, brother of the cathedral's archdeacon Dom Claude Frollo. When Jehan dies, the child is hidden away by Dom Frollo in the belfry of Notre Dame, where he is charged with ringing the huge bells.

On January 6, 1482, the Feast of Fools (above, right), a day when criminals cannot be arrested and the despised gypsies can sing and dance in the square in front of the church, a grown-up Quasimodo sneaks outside. There, he—along with Dom Frollo and Phoebus de Martin, former soldier/now captain of the cathedral guards—encounter and fall in love with the sultry gypsy Esmeralda. When she rejects Frollo's sexual advances, he has her arrested for witchcraft and sentenced to be burned at the stake, but Quasimodo rescues her and takes her away to sanctuary in the cathedral belfry. From there he hurls molten lead down on the besieging soldiers. What subsequently occurs is decidedly not "happily ever after," but a natural, powerful outcome of all that has occurred before. 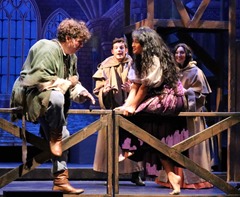 Physically, the play harkens back to the medieval era's mystery plays, liturgical dramas and Catholic rituals, all of which used drama to communicate with the illiterate populace. A large, versatile ensemble acts as the congregation, plays various characters and provides exposition by narrating the action occurring between scenes. Several portray a group of gargoyles that Quasimodo talks to as he struggles with his inner thoughts and desires. By the addition of banners, two towers and moveable railings that even serve as prison bars, the magnificent set designed by Beau Kennedy and lit by Diane Giangreco evokes the grand cathedral of Paris, along with the narrow streets and alleys that surround it. The effect is heightened by the addition of a choir chanting hymn-like liturgical passages in Latin from platforms at each side of the acting space.

The very talented principal actors (nay, the entire company) imbue this Hunchback dramatic and psychological power. With his sonorous voice and commanding stage presence, Ken Garcia’s Dom Frollo (right) is a self-righteous, arrogant prig who finds himself undone by the force of his (suppressed) sexual desires. There are times we almost feel sorry for him.

As Quasimodo, a hunchback with one eye considered so ugly that he is hidden away in the belfry at the top of the church, Will Carey (above left with Erica Nadera as Esmeralda) fully inhabits his character’s persona. His glorious voice and gentle manner belie his ugly appearance, especially when he sings yearningly to be "Out There" in the city or his delight at showing Esmeralda his view from "The Top of the World."

Michael Barthel is terrific as the handsome Captain Phoebus de Martin, who falls hard for the gypsy girl, as well, is really the only one of the three who has a chance with her. 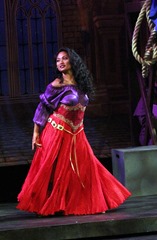 Rounding out this love quartet and the object of the men's desire, Erica Nadera (left) as Esmeralda sings and dances sinuously, seductively and with abandon while conveying the heartbreak at being mistreated and hated merely for being a gypsy. That such treatment still exists is sad and sobering evidence that "the more things change, the more they stay the same." She and Phoebus’ wish for a better world ("Someday") is reminiscent of West Side Story's iconic "Somewhere."

The score by Menken and Schwartz is in the finest tradition of American musical theater and thoroughly appropriate to this epic tale. The opening number, "The Bells of Notre Dame," sets the somber tone, and repetitions of Kyrie Eleison ("God Have Mercy") by the chorus reinforce the liturgical setting. Meanwhile, the rowdy songs and dances of the gypsies and peasants highlight the "Topsy Turvy" aspect of the Feast of Fools. Michael Scanelli’s choreography is appropriate to each world: sedate and slow for the church scenes; complex and wild for the street.

The result is a thoroughly enjoyable show that doesn't gloss over the darker aspects of Victor Hugo's novel. The Hunchback of Notre Dame has its comic moments, to be sure (check out St. Aphrodisius), but they are always tinged with knowledge that evil exists in the world. It's difficult to be light-hearted, even on the Feast of Fools Day, when at any moment you can be run out of town or accused of sorcery and burned at the stake.

There are no plans to take this production to Broadway, so get on over to SOPAC to see The Hunchback of Notre Dame. This splendid piece of musical theater is worth every penny of the ticket you buy. Best of all parking is free, and South Orange has lots of wonderful restaurants in which to dine. But please, leave the little ones at home; the production is advertised as being suitable for children over the age of 12—when they can understand and appreciate the show's main themes. Younger children will be lost, and you'll find yourself having to explain too much.

The Hunchback of Notre Dame will be performed at South Orange Performing Arts Center (SOPAC), One SOPAC Way, South Orange, Fridays and Saturdays at 8 PM and Sundays at 2 PM through July 22. For performance times, information and tickets, call the box office at (973) 313-2787 or visit www.lonj.org online.