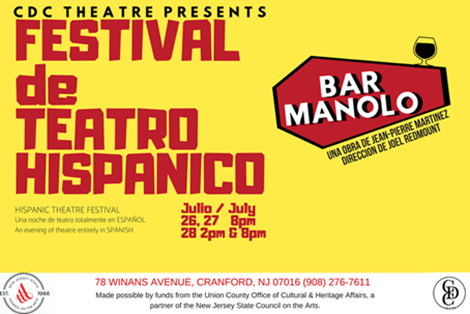 Spanish-language theatre is alive and well in New Jersey.  For the second straight year, the CDC Theatre in Cranford NJ will feature its Hispanic Theatre Festival (or, as it prefers to be known, its Festival de Teatro Hispanico) for four performances.

Despite a large and vibrant Hispanic population of 1.2 million in the state, the creators of this event recognized that there are no Spanish-language plays being performed on an ongoing basis that cater to that community in central New Jersey.  As far as the Theatre world is concerned, the beauty of the language and the richness of the Hispanic heritage is simply being ignored.  Families that want to attend live theatre, do so exclusively in English.  Children grow up never hearing Spanish on the stage.

Last summer, the CDC Theatre, the longest continuously-running Community theatre in New Jersey, bridged that gap by mounting the premiere Hispanic Theatre Festival. The play being showcased this season is Bar Manolo, a full-length comedy by European playwright Jean-Pierre Martinez. The story unfolds in a friendly, comfortable bar that happens to stand across from a cemetery, and the bar owner, Manolo, relies on a steady stream of customers looking for a little respite from the activities across the street. This particular afternoon features the interplay of two philosophical funeral workers, a professor who may or may not be having an affair with one of his students, a flooded basement, a damaged coffin, a misplaced cell phone, a lost lottery ticket, a waitress frustrated with her bad luck with online dating, a befuddled old lady and a host of other characters, all of whom Manolo greets with a friendly smile and an offer of watered-down cognac.

The cast includes both experienced and first-time actors, drawn to the Hispanic Theatre Festival by the opportunity to showcase their heritage in Spanish, including the communities of Cranford, Edison, Linden, Union, Montclair, Perth Amboy, Millburn and Elizabeth.  Bar Manolo is directed by Joel Redmount of Scotch Plains, who founded and produces the Hispanic Theatre Festival.

Knowing it wouldn’t truly be a Festival without appropriate music and food, the Producers of the event are looking to provide complementary refreshments on Opening Night, in the spirit of the evening.

And while the CDC Theatre is looking to tap into the underserved Spanish-speaking audience throughout our geographic region, they extend an invitation also to those non-Spanish speakers who may be intrigued by the multicultural nature of this Theatre Festival.  The CDC looks forward to exploring the richness of la cultura Latina, as reflected in plays that mirror the pride, the drama and comedy of the human experience, as showcased through a Spanish language lens.