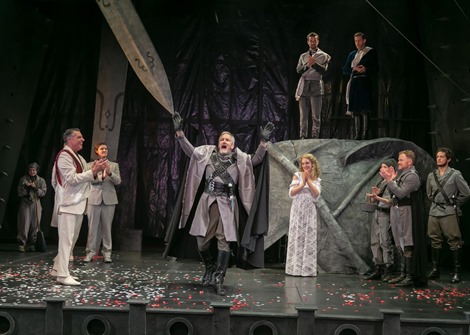 For those who decry the violence so prevalent today in films and video games, rest assured that this is not a new trend. Early in his career and pandering to Elizabethan audiences’ predilection for bloody revenge plays, William Shakespeare wrote (or not, as some critics opine) one of the goriest dramatic pieces ever to appear onstage. (Above, Bruce Comer’s Titus is welcomed home to Rome; Robert Cuccioli and Fiona Robberson applaud his return.)

Titus Andronicus is so unlike the Bard’s more polished tragedies (Hamlet, Macbeth, King Lear) and so hyperbolical in its bloodshed that it’s not performed very often; indeed, the last time The Shakespeare Festival of New Jersey mounted a production was 30 years ago!

Written in the early 1590s, the decade when Shakespeare began his playwrighting career, Titus Andronicus follows the models of many of the revenge plays so popular at the time: Christopher Marlow’s Jew of Malta and Thomas Kyd’s Spanish Tragedy come to mind. Adhering to the formula for all tragedies, the hero is an honorable man who, through a flaw in his character, brings ruin to himself and those around him. 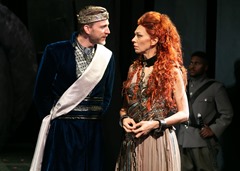 Returning to civilized Rome after defeating the barbaric Goths, celebrated military leader Titus Andronicus (top) humbly refuses the imperial crown, bestowing it instead on the treacherous Saturninus (Benjamin Eakeley with Vanessa Morosco as Tamora) and promising his daughter Lavinia as bride to the new emperor—despite her being betrothed to his virtuous rival and brother Bassianus. When Titus’ sons and Bassianus abduct Lavinia, Titus cannot endure the shame of his violated promise; he kills his son Mutius in the ensuing melee, thus setting in motion various barbarous events, one of them involving the captured Goth queen Tamora, who have been freed by Saturninus. The rape and mutilation of Lavinia by Tamora’s dimwitted sons lead to more barbarism, most of it committed by Titus and his family. Ritual human sacrifice, murder and savage mutilation abound until the last body falls. The Andronici become like their enemies; private and public interests clash, Titus becomes a menace to public order and, although he is somewhat vindicated at the end, Rome’s public welfare suffers. 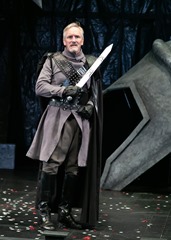 Despite its bombast, length (replete with continuous repetition) and myriad references to Classical authors, STNJ’s current production is elegant and absorbing. Director Brian Crowe has devised some pretty neat devices to convey methods of punishment and the amount of blood being shed, and he keeps the large cast adroitly moving around the stage without bumping into each other or stepping on each other’s lines. Too, he elicits terrific performances from everyone from main character to lowly extra.

Bruce Cromer (left) is splendid as Titus, his portrayal moving smoothly from humble general to raging avenger, from honorable man to conniving, 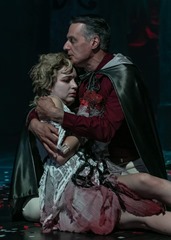 pretend madman, to wily chef cooking and serving a disgusting banquet to his enemies. In contrast stands his honorable brother, the tribune Marcus, played with great dignity and steadfast allegiance to a civilized Rome by Robert Cuccioli (right, with Fiona Robberson). His is the single voice of reason in the entire play. Benjamin Eakeley is an appropriately treacherous Saturninus, a man who reveals his true colors in his opening demand that his supporters draw their swords to achieve his imperial suit, as opposed to his rival Bassianus (portrayed with sober honor by Oliver Archibald) who appeals to “justice, continence and nobility” to support his right to the crown. 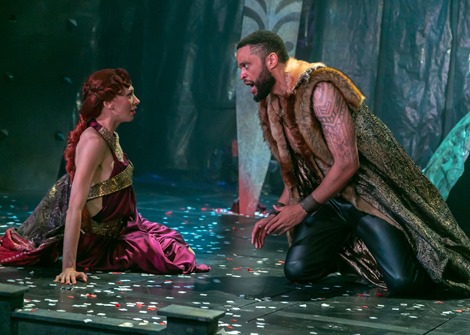 The two women at the crux of this vengeful campaign are a study in contrasts. Fiona Robberson (above, right) projects the sweet innocence of an obedient daughter, yet she’s not above insulting Tamora’s sons with a sharp tongue. Vanessa Morosco’s sensual and sensuous Tamora (above with Aaron the Moor, played by Chris White) is a wonder to behold, especially in scenes where she plots her revenge on Titus and his sons for killing her eldest son. In a play within a play, she and her two remaining sons don ravens’ masks and wings to egg Titus to seek revenge, leading to a rapid succession of slaughters. Morosco puts Tamora’s machinations on full display; we can admire her single-mindedness at avenging her losses even as we are repulsed by her viciousness and depravity. 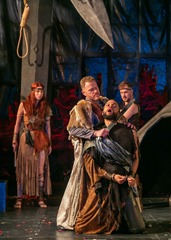 That nature involves her sidekick/lover Aaron the Moor, performed by Chris White as the incarnation of pure evil. He announces and brags about his evil so much that he resembles Mike Meyers’ Dr. Evil, the antagonist who openly and often proclaims his malevolence the Austin Powers films! White unwaveringly conveys Aaron’s evil but shows a soft side when confronted with the bastard son he has fathered with Tamora.

As for sons of the play’s antagonists, Clark Scott Carmichael (left, with Chris White) is fine as Titus’ somewhat upright eldest son Lucius, the last man standing when the lights go down. His reasonable demeanor is juxtaposed against Tamora’s ignorant, lust-driven sons Chiron and Demetrius, played with appropriate dangerous dopiness by Quentin McCuiston and Torsten Johnson, respectively. Their horrifying comeuppance is inventively portrayed.

Scenic designer Dick Block has created a world of gray and black, with a gigantic helmet on its side surrounded by swords and spikes to set the stage for this lurid tale. Yao Chen’s costumes are a mixture of modern dress and military gear, along with more rustic weeds worn by the Goths. Robert Cuccioli’s white suit telegraphs his civilized stance throughout the entire bloodshed. And Andrew Hungerford’s lighting and Karin Graybash’s sound enhance the atmosphere fraught with violence while Rick Sordelet’s fight direction adeptly conveys the ferocious hostility of all parties.

So why after 30 years would STNJ decide to bring Titus Andronicus to the F.M. Kirby Theatre stage? How would such a bloody revenge tragedy be relevant to 21st century audiences? Well, modern audiences seem to share the Elizabethan appetite for revenge; don’t get mad, get even seems to be a mantra we hear and witness today (think: tariffs). The picture of a society drowning in violence and lacking civil thought or action mirrors much of what is occurring today via social media, white people calling 911 and the cops on black people who are merely going about their business, the constant drumbeat of fearmongering vis à vis immigrants, gang members and city violence. The play’s misogyny and depiction of patriarchal ascendency, unfortunately, mirrors some present-day attitudes toward women.

With its length (close to two and three-quarter hours), verbosity and arcane references to Horace and Ovid, Titus Andronicus is clearly the work of a young playwright, showing off his way with words and his education in Stratford-on-Avon. The Shakespeare Theatre of New Jersey is to be commended for bringing this play to public attention in a superbly acted, ingeniously staged production that reminds us of the troupe’s ability to open new dramatic frontiers in stylish, polished, professional productions. They are a theatrical treasure we are lucky to have here in New Jersey.

Titus Andronicus will be performed at the F.M. Kirby Shakespeare Theatre on the campus of Drew University, 36 Madison Avenue, Madison, through August 5. For performance information and tickets, call the box office at 973.408.5600 or visit www.ShakespeareNJ.org online.

Note: The play is not suitable for children. Older teens might find it interesting, but leave the kids at home.