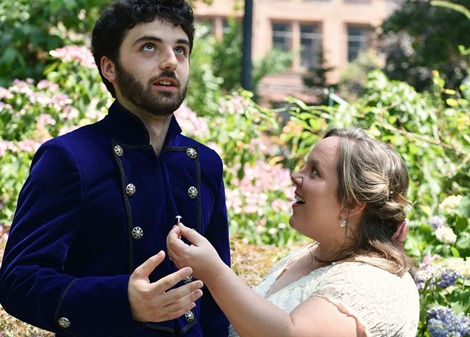 Set in France and Italy, All's Well That Ends Well is a story of one-sided romance, based on a tale from Boccaccio's The Decameron. Helena (Noelle Fair TOP), the orphaned daughter of a well known doctor, is under the protection of the widowed Countess of Rossillion (Sharon DeWitte Caccibaudo) after her father’s death.

In love with Bertram (Joey Sanita TOP), the countess' son, Helena follows him to court, where she cures the sick French king (Aurelio Kogan) of a fatal illness. In exchange for curing the king, Helena asks for Bertram’s hand in marriage. The king rewards Helena by granting the marriage. However, Bertram resists the marriage, rejecting her in court. 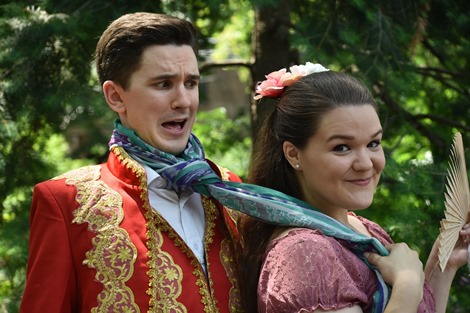 When forced by the king to marry her, he refuses to sleep with her and, accompanied by the braggart Parolles (Ryan Knight ABOVE with Noelle Fair), leaves for the Italian wars. Bertram says that he will only accept Helena if she obtains a ring from his finger and becomes pregnant with his child. Helena goes to Italy disguised as a pilgrim and suggests a 'bed trick' whereby she will take the place of Diana (Arielle Legere), a widow's daughter whom Bertram is trying to seduce.

A 'kidnapping trick' humiliates the boastful Parolles, whilst the bed trick enables Helena to fulfil Bertram's conditions, leaving him no option but to marry her.

“Our life is a mingled yarn; both good and ill together,” HSC’s production asks you to look at both the good and ill spun within the yarn of the story of its two main characters: Bertram and Helena. “In most productions of this show, Helena is painted a wronged victim. She is rejected by Bertram in a very public, cruel, and embarrassing way,” says Ciccarelli, the show’s director, “but her response and subsequent plot to this rejection can be seen as deceitful, and even questionable.

“She befriends another woman and they trick him into sleeping with Helena, thus getting her pregnant and fulfilling Bertram’s conditions. Conversely, many productions paint Bertram out as a spoiled royal brat who treats Helena poorly, but let’s not forget, he was forced into a marriage that he had no say so in. The same thing happens to Juliet, and we always have sympathy for her when she is forced to marry Paris. Shouldn’t Bertram be given the same consideration?”

Thus, Ciccarelli hopes to reveal a more complex and nuanced understanding of these two characters and examine their arch throughout the story.

“Really, when you take a step back and look at the actions of these characters, you get a very different picture of what is going on here.”

The show also presents many opportunities for comedy, and is rather witty with its exchanges. “The show was written during the war of the poets,” says Ciccarelli “so sometimes the language is very lyrical, but also complex in meaning and in speaking it.” Fair, who plays Helena, agrees “I often find myself tripping over the language.” Coupled with this, the

“I think it’s an interesting play,” says Noelle Fair, who plays Helena, ”it’s not one of those plays that is performed all that often, but I often love delving into those lesser known shows. I find there is more opportunity for freedom and interpretation. Unlike some of the other lesser knowns, though, I think this one will appeal to those who are not familiar with Shakespeare. It’s a pretty easy plot to follow, the characters are funny, witty, and clever, and I think it has characters with whom the audience can sympathize or side with. I also like that at the end of the play. All ‘seems well’ - yet there’s this uncertainty hanging in the air. I like plays like that where you leave having conversations and debates about it, and I think this is one of those plays. It’s a problem play, so you’re left with – well, a problem!”