If, as graduation speakers are prone to say, “life is a journey,” then Alison Bechdel’s award-winning musical, Fun Home, based on her award-winning graphic memoir, is a trip around the world, a theatrical voyage of discovery during which she lays bare family secrets and assesses their effects on her interpersonal relationships and her art. If you missed the show on Broadway, you can catch its North Jersey premiere by 4th Wall Theatre at the Studio Playhouse in Upper Montclair for one more weekend through June 17th. (Above, Annika Bergstrom-Shaw and Ted Cancila)

As told by three very talented narrators portraying the playwright herself at various stages in her life, Fun Home recounts Bechdel’s discovery of her own homosexuality and that of her father Bruce, a full-time high school English teacher and part-time funeral director. The three move fluidly from past to present (and back again) to depict Alison’s growing awareness of her own sexuality while revealing her father’s enigmatic bullying behavior and hidden desires for men. This is a family filled with secrets that make themselves known drip by drip, just as a child would experience them, until the pain becomes almost unbearable that it’s almost a relief when Bruce Bechdel commits suicide.

4th Wall’s Artistic Director Kate Swan has directed the production with just the right touch, not shying away from the humor or the pain, but not ramming them down our throats either. She’s selected a stellar cast to tell this heart-breaking story that “demonstrates how much our world has changed and reflects just how far we’ve come,” as the Wall Street Journal wrote in its review of the Broadway production.

Annika Bergstrom-Shaw as Small Alison delightfully demands that her Daddy come and play airplane with her cringes as he orders his brood to clean up the chaos of living (or her to wear a dress, below), and becomes aware, even at the tender age of 4, of a butch delivery woman, whose “Ring of Keys” lay bare her nascent feelings for the same sex. As college-age Alison, Samy Cordero demonstrably wrestles with her character’s sexuality, eventually coming out as a lesbian, only to be profoundly disappointed when neither of her parents reacts to this momentous news.

Julie Stiel’s Helen is too tortured to respond to her daughter, except to reveal Bruce’s homosexuality, a secret she’s been hiding since their honeymoon. The “Days and Days” of devastating unhappiness endured by this wife and mother as she attempts to “rearrange and realign/Everything” so the familial chaos is never apparent takes its toll on her as she is diminished before our very eyes. And as Bruce Bechdel, the point around which this story revolves, Ted Cancila’s depiction of a soul in torment is a marvel. He ping-pongs from loving parent to strict martinet to self-proclaimed literary expert to sexual predator who preys on his former students, even being arrested for doing so, or leaves his children alone in a Greenwich Village apartment while he slips out to troll for young men. He’s not always likeable, but his pain is palpable, especially in his final scene where he finds himself on the “Edges of the World.”

As the two younger children, Cameron Dickson (Christian) and Justin J. Roth (John) are adorable, especially when they perform a “commercial” for the family funeral parlor (right). Corinne Walker’s Joan is an able guide for coed Alison as she discovers her true self. And Shane Long’s portrayal of various attractive young men approached by Bruce—some of them mindful of what’s transpiring, others naïve—elucidates the older man’s difficulty keeping his homosexuality under wraps where it can’t be seen. 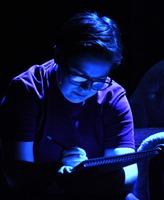 Knitting the disparate time periods together—from the opening scene where she sketches her 4-year-old self to the final moments where she joins her other selves to “fly away”— is the adult Alison Bechdel, captivatingly and endearingly portrayed by Sarah Levine McClelland (left), who weaves in and out of the action, reading from her diary or commenting on the unfolding action. Through it all, she comes to understand better her family’s secrets, the consequences of her father’s living in the closet and herself when she comes out as a lesbian. She is funny, powerful, intelligent; we hurt with her and rejoice with her on this voyage of discovery.

It’s appropriate that Fun Home appears during Gay Pride Month, a celebration that would have been unthinkable in 1976, when the play’s action occurs. That the show was written by Lisa Kron and Jeanine Tesori, who both won TONY awards for best score, underscores the strides made by women in a male-dominated theatrical world.

You’re probably asking, “What’s up with the title?” Well, for one thing, it’s Bechdel-speak for funeral home, kind of a shorthand they’ve invented for their home-slash-business. To me, it suggests the carnival fun house, where mirrors distort and terror lurks around corners, and that wonderful feeling we experience upon exiting is analogous to the joy Alison feels when she acknowledges her sexuality. Hopefully, her experience will be more prevalent as the culture becomes more accepting of our sexual differences.

Fun Home will be performed at the Studio Playhouse, 14 Alvin Place, Upper Montclair, through June 17, Friday and Saturday at 8 PM and Sunday at 3 PM. For information and tickets visit www.4thwalltheatre.org or call 973. 996.8484.