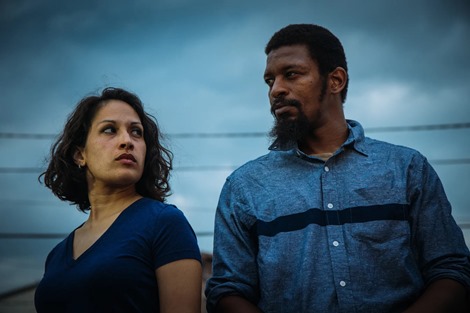 The BOX: Resistance Edition
an evening of music, spoken-word, poetry, dance and other performances

The BOX: Resistance Edition promises to be a thought-provoking, eclectic array of performances that turn protest and outrage against oppression into music, poetry and performances. Emcees for the event are two of the most vital artists to emerge from the Hudson County scene: Ariel Guidry, a jazz, blues and soul singer who has performed at White Eagle Hall, Maxwell’s and The Hutton Trumpets Jazz Club in Montclair, and Wyme Santos, a writer, performer and activist, who has performed at Art House, the Landmark Loew’s Theater, 660 Studios and the Mary Bethune Center.

Guidry and Santos will present a showcase of often politically charged work by some of the area’s most compelling singers, musicians, poets and performers, all of whom will explore the meaning of resistance and the anger and hope this theme invokes. “It seems as if the word resistance is synonymous with forward movement,” said Santos. “This is the time to own ourselves, to make the conscious decision to be. Especially in an environment that screams for your death, we find the light. This show speaks to the many movements that we all find ourselves a part of.”

"In today's tumultuous times, artists find our true selves and fulfill our purpose: to be the voice of the voiceless, unheard, and oppressed,” said Guidry. “These are the times when the language of mediums cross barriers of culture, language, and understanding. As artists, our biggest enemy is apathy because through art, we learn we are one."

For a nonprofit arts organization known for diverse programming that confronts and examines timely issues, JCTC could not have chosen a more relevant theme to close out the spring portion of its 2018 season. The Resistance series featured plays, readings, dance and other performances – combined with community dialogue and audience/artist discussions – that each in their own way asked what is resistance, and why are people compelled to resist, especially now? The BOX: Resistance Edition will be culmination of this journey as well as the last chance for the audiences to view the Resistance Art Show in the art gallery at Merseles Studios.

JCTC solicits submissions for The BOX through social media and notices in theatre publications and entertainment & theater blogs. A panel, headed by Dan Pieraccini, Manager, JCTC – who is also the curator for The BOX: Truth Edition – reviews and selects submissions.

Activists often decree ‘Think Globally, Act Locally’ and that saying will come to life at The BOX: Resistance Edition, where one of the highlights will be a special performance by The Jersey City Resistance Choir, a Jersey City-based community group dedicated to raising awareness for at-risk groups and organizations through song. The name of this BOX and the name of the singing group –whose slogan is ‘Resisting Tyranny One Song at a Time – being the same is a happy coincidence. Some of the recent gigs by this unabashedly political choir include AIDS Walk NYC 2018 and benefits for Community Hope NJ's Hope for Veterans Program, Sensible Gun Control Legislation/Sandy Hook Promise and the Southern Poverty Law Center.

Funding for Resistance was made possible by generous support from the Hudson County Office of Cultural & Heritage Affairs/Tourism Development, Thomas A. DeGise, Hudson County Executive and the Hudson County Board of Chosen Freeholders and the New Jersey State Council on the Arts.

Resistance was also made possible through the generosity of Ben LoPiccolo Development Group, JCTC’s Board of Directors, private donors and local Jersey City businesses.