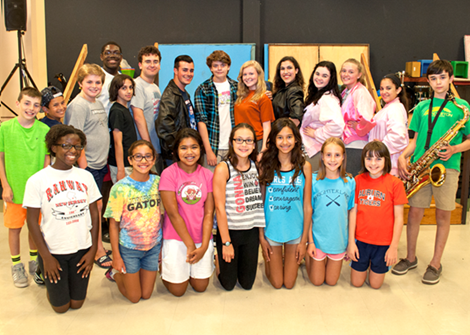 Theater Project summer performing arts programs for kids 8 and up.

After more than 10 years in Cranford, The Theater Project is replicating its very popular young people’s summer theater program in Union Township. Both programs will run from late June to early August and culminate in a weekend of performances for friends, family and the community. Along the way, students 8-18 will act, sing, build confidence in themselves, make friends and have a wonderful time.

Both programs run Tuesday, Wednesday, and Thursday until performance week.

Theater Project Jr has been serving students and families in Union, Essex and Middlesex counties for over 10 years. “I just can't say enough wonderful things about the program.  My girls love it, and we can't thank you enough.  See you next summer!” says Pauline Papapietro, Cranford.  Mindi Kaunfer of Springfield says, “I have seen my son grow as an actor year after year with the Theater Project Junior group right in front of my eyes! Adam has had several school leads from the confidence the summer theater has provided him.” Veteran participant Mark Lynch of Cranford has been with the program for six years: “TPJ was the best acting experience I had -- the difference from Theater Project Jr than any other place I performed is the people there are kind and just want to help you.”

The Theater Project, a professional theater company in Cranford, Union and Maplewood, is celebrating over 20 years of bringing productions of the best contemporary plays to New Jersey. Their mission is to produce new or lesser-known plays on challenging themes, to introducing young people to the joys of live theater, and to provide avenues for creative expression for New Jersey’s playwrights, actors and directors.