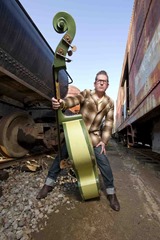 WHEN: Lee Rocker of The Stray Cats on Saturday, July 14, at 8PM; the George Gee Swing Orchestra on Saturday, July 21, at 8PM; Hair running July 27 through August 5 and YESSONGS: The Concert on Saturday, August 11, at 8PM.
WHERE: Sitnik Theatre of the Lackland Performing Arts Center at 715 Grand Ave. Hackettstown
TICKETS:

Grammy-nominated musician and bass player Hall of Famer, Lee Rocker and the Stray Cats sold more than 10 million records, garnered an astounding 23 gold and platinum records worldwide, and were music video pioneers of the MTV. From the cover of the Rolling Stone magazine, to appearing on Saturday Night Live, to headlining the US Festival and touring with the Rolling Stones, Lee Rocker has seen and done it all.   In addition to the Stray Cats and the Rolling Stones, Rocker has toured and performed with George Harrison, Ringo Starr, Willie Nelson, Leon Russell, and John Fogerty.  In 1982 Rocker and his father Stanley Drucker, (classical clarinetist) both received Grammy nominations; this was something that has only occurred twice in the history of the Grammy Awards.  In 2012 Lee appeared on Broadway in the hit musical "Million Dollar Quartet" and in 2014 he was inducted into the Bass Player Hall of Fame. Rocker has received numerous honors for his contributions to music and the arts, including being inducted to the Rockabilly Hall of Fame, the Long Island Music Hall of Fame and he is a recipient of the Visionary Artist Award by the City of Laguna Beach California. In his concert performances, Lee Rocker rocks every town and leaves every audience on their feet and cheering.

The George Gee Swing Orchestra packs a lot of swing into compact songs and tight, well-organized sets. Long enough to catch a groove, and short enough to catch your breath. The George Gee Swing Orchestra was the first big band to play on MTV. The band was featured in an NBC-TV movie and has been spotlighted on “Entertainment Tonight,” “Live with Regis & Kathie Lee,” “Cake Boss,” “Live from Lincoln Center,” and in appearances on CNN and MSNBC. The band also provided specially scored music and made an “animated” appearance on an episode of the Fantastic Four cartoon for Marvel Comics. GGSO has dazzled audiences from Boston to Beverly Hills and from Zurich to Tokyo. The band has a mammoth tour resume – including top swing clubs, swing dance societies, and “lindy exchanges” across the US, numerous tours of top concert halls, and powerful “Battles of the Bands” in New York, Los Angeles, Washington, DC, Cleveland, Philadelphia and Quebec.

Centenary Stage Company and Centenary University’s NEXTstage Repertory launch their first-ever summer musical as part of the Centenary Stage Company Summer Jamfest. This summer NEXTstage Repertory will be present the musical Hair. With book and lyrics by Gerome Ragni and James Rado and music by Galt MacDermot, Hair celebarates the sixties counterculture in all its barefoot, long-haired, bell-bottomed, beaded and fringed glory. To an infectiously energetic rock beat with songs like “Aquarius,” “Good Morning, Starshine,” “Hair,” “I Got Life,” and “Let the Sun Shine.”, Hair explores ideas of identity, community, global responsibility and peace. Hair remains relevant as ever as it examines what it means to be a young person in a changing world. Specific performance dates are Friday, July at 2PM; Fridays, July 27 and August 3 at 8PM; Saturdays, July 28 and August 4 at 8PM; Sundays, July 29 and August 5 at 2PM and Thursday, August 2 at 7:30PM. Ticket prices vary per performance.

YESSONGS: THE CONCERT, considered pioneers of the progressive rock genre and regarded by fans as living legends, YES has etched its unique sound and mystical lyrics into international charts for over 40 years. YES has garnered sales of more than 30 million albums worldwide and was renowned for its remarkable live performances and symphonic stage dynamism. In 1972 YES produced the seminal audio and visual experience YESSONGS, capturing the super group at the height of its success. Recreating this fantastic visual and audio masterpiece, The Hype Touring Agency presents YESSONGS: THE CONCERT starring Phil Naro, John Kastelic, Matt Riddle, Mark Matthews and Marty Zlocki. These five musicians have played with the likes of Brian May of Queen, Foreigners Lou Gramm, Peter Chris of Kiss, Trooper and have collectively performed on over 100 albums and have toured the world extensively. YESSONGS: THE CONCERT diligently recreates the 1972 concert with stunning detail.

The CSC box office is open Monday through Friday from 1 – 5PM and two hours prior to every performance. Centenary Stage Company can also be found across social media platforms; Facebook, Instagram and Twitter. Like and follow to receive the latest in CSC news and special offers.  Centenary Stage Company’s 2018 Summer Jamfest is sponsored in part by Heath Village Retirement Community and The House of the Good Shepherd.