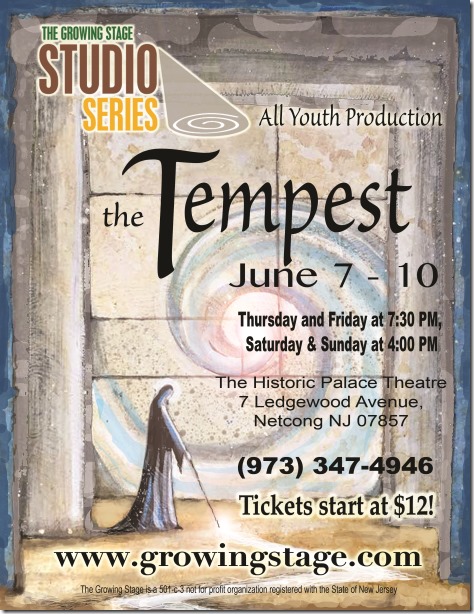 WHEN: June 7th through the 10th with performances at 7:30 PM on Thursday and Friday, and matinees at 4:00 PM on Saturday and Sunday
WHERE: The Growing Stage, The Children’s Theatre of New Jersey, located in the Historic Palace Theatre on Route 183 in Netcong, New Jersey
TICKETS: $15 for Adults and $12 for Children & Seniors, with group rates available.
Tickets can be purchased by calling the TGS Box Office at (973) 347-4946 or visiting www.growingstage.com


THE TEMPEST is believed to have been written in 1610–11, and thought by many critics to be the last play that Shakespeare wrote alone. It is set on a remote island, where the sorcerer Prospero, the rightful Duke of Milan, plots to restore his daughter Miranda to royalty by using illusion and magic. He conjures up a storm, a tempest, which brings his brother Antonio, who stole his rightful title, and King Alonso of Naples, who took part in the scheme, to the island where Prospero and Miranda now live. Antonio and the King believe they are shipwrecked and marooned on the island, but it is really Prospero weaving his magic in order to get the justice he believes he deserves.

THE TEMPEST is an all-youth production featuring 24 young performers hailing from Hunterdon, Morris, Sussex and Warren counties. This production is a part of our Studio Presentation Series. This series initiated in the fall of 2009 has succeeded in engaging both patrons and artists.

Targeted for specific-aged audiences rather than the wide-reaching family fare of the Main Stage, the series provides community artists with a unique opportunity to participate in the creative process of “trying out” new, more experimental works under the direction of our professional artists. This program allows our company to both cultivate new talent and challenge audiences.


The Growing Stage – The Children’s Theatre of New Jersey programs are made possible, in part, by funding from the New Jersey State Council on the Arts, and contributions from numerous corporations, foundations, and individuals.