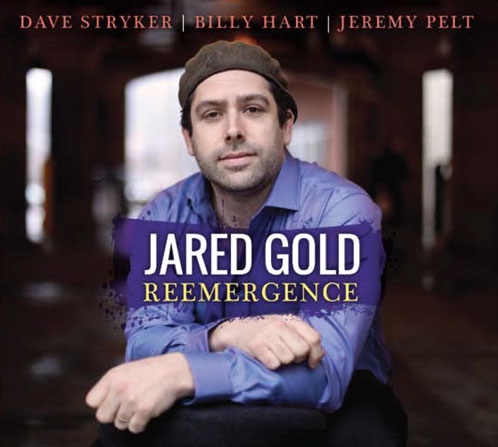 What The Press Is Saying About Jared Gold's “Reemergence”

Bobby Reed
Most jazz fans have encountered the unfortunate scenario of being thrilled by the names on an album cover but then being disappointed by the music. That is definitely not the case with the new leader project from Jared Gold, which showcases the versatile organist and his all-star band: guitarist Dave Stryker, drummer Billy Hart and trumpeter Jeremy Pelt. Stryker, who also produced the album, has a 14-year history with Gold, and his simpatico rapport with the organist spices up the proceedings, as each musician frequently adds clever coloration when the other is unleashing a sturdy solo. Hart—whose subtle brushwork is just as mesmerizing as his powerful stick-work in this program—demonstrates the mastery that has made him a legend. Pelt, who adds potent brass to three tracks, elevates this disc: Without him, these sessions might have yielded a memorable trio disc, but with him on board, the result is one of the strongest straightahead discs of the year thus far.

This band certainly can burn, as evidenced by the title track (which was penned by the leader), but a poignant reading of The Beatles’ “She’s Leaving Home” reflects Gold’s ability to tug at the listener’s heartstrings with a melancholy mood. Gold has curated a wonderful, eclectic program that features two Gershwin tunes (“It Ain’t Necessarily So,” “How Long Has This Been Going On”), Ornette Coleman’s “Blues Connotation,” Stevie Wonder’s “Lookin’ For Another Pure Love” (from 1972’s Talking Book) and “One For John A,” a swinging, original tribute to the late guitar icon John Abercrombie, with whom the organist worked for years. Gold and Stryker can ignite fireworks at will, but on this rendition of “It Ain’t Necessarily So,” both musicians coax a vocal timbre out of their respective axes. Nicely done, gentlemen.

...one of the year’s strongest titles to date and upon repeated listening  gets so much more enjoyable. - CJ Shearn Jazz Views

Jeff Know-Audiophile Audition
...this is a CD that will be loved by Hammond fans, and highlights Gold’s talents as both a creative organist as well as arranger. His talents have matured and hopefully we’ll see more exploratory efforts from Jared well into the future.