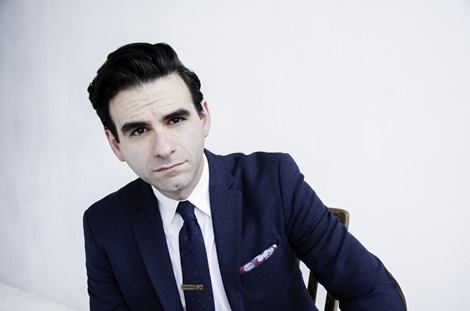 Q&A WITH JOE ICONIS, COMPOSER/LYRICIST OF BE MORE CHILL

Picture this: Joe Iconis, a keyboard, and a small room full of people. Now is your chance to ask Joe what you’ve always wanted to know about Be More Chill, Smash, and what he’s working on next!

JOE ICONIS is an acclaimed musical theater writer whose musical Be More Chill (written with Joe Tracz) premiered at Two River in 2015 and will play Off-Broadway at the Signature Theatre in NYC this summer; the original cast recording has been streamed more than 100 million times. Iconis and Tracz are currently writing a new musical as a Two River Theater commission. His other musicals include Love in Hate Nation, Broadway Bounty Hunter, and Bloodsong of Love, and his song “Broadway, Here I Come!” was cited by the New York Times as a new entry in the Great American Songbook. He was named “one to watch” in Billboard's Top 10 picks of the next generation of Broadway singers and songwriters. His albums Two-Player Game, Be More Chill, Things to Ruin and The Joe Iconis Rock and Roll Jamboree are all available on Sh-K-Boom/Ghostlight Records. He has been nominated for two Drama Desk Awards, a Lucille Lortel Award, and is the recipient of an Ed Kleban Award, a Jonathan Larson Award, an ASCAP Harold Adamson Lyric Award, and a MAC John Wallowitch Songwriting Award. www.MrJoeIconis.com