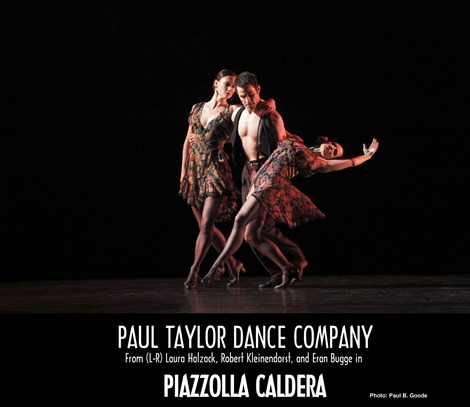 Paul Taylor, one of the most accomplished artists this nation has ever produced, continues today to shape the homegrown American art of modern dance as he has since becoming a professional dancer and pioneering choreographer in 1954. Having performed with Martha Graham's company for several years, Mr. Taylor uniquely bridges the legendary founders of modern dance – Isadora Duncan, Ruth St. Denis, Ted Shawn, Doris Humphrey and Martha Graham – and the dancemakers of the 21st Century with whom he is now working.

At an age when most artists' best work is behind them, Paul Taylor continues to win public and critical acclaim for the vibrancy, relevance and power of his dances. With over 140 witty, menacing and joyful creations to date, Paul Taylor continues to amaze audiences with his inventiveness and poignancy. The subject of the documentary films Dancemaker and Creative Domain, and author of the autobiography Private Domain, Paul Taylor is the recipient of nearly every major honor given to artists in the United States including the Kennedy Center Honors, the National Medal of Arts, an Emmy and a MacArthur Foundation "genius grant."

The Paul Taylor Dance Company features two "homegrown" dancers from the area: Sean Mahoney (left), who attended Princeton Ballet School and was a featured dancer with American Repertory Ballet; and Jamie Rae Walker (center), who also began her training with Princeton Ballet School.  Michael Trusnovec (right), one of the company’s main dancers, is a weekend resident of Asbury Park where he owns a home.

Directly after their three-week long run at Lincoln Center, the Paul Taylor Dance Company is making their debut at the Axelrod PAC with three of their iconic original pieces.

Using movement inspired by insects, the dance offers a comedic view of mating rituals, in which the female of the species is often the stronger, predatory partner.

The music of tango – with Spanish, Italian, Indian, African and Jewish influences – was taken to new heights by the great Argentine composer Astor Piazzolla. Without a single authentic tango step, Paul Taylor captures the essence of tango culture. In a dimly lit dive, working-class men and women confront each other in sizzling duets and trios, each person desperate for a night of passion.

“Beautiful in its visual effects, poetic in its natural flow of movement. The piece is an ode to tenderness and blooms like a flower.” – Anna Kisselgoff, New York Times