“Defiance” Followed by Q & A with Lola Kline, Niece of Bielski Polish Partisans portrayed in the film 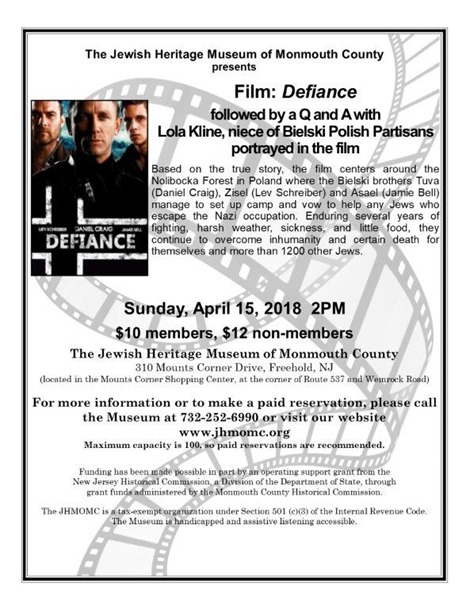 Followed by Q & A with Lola Kline, Niece of Bielski Polish Partisans portrayed in the film

Lola Kline, a niece of the Bielski partisans portrayed in the film, will answer questions about her uncle and her family and show personal photographs and memorabilia.

According to Lola Kline, and based on the true story, the film centers around the Nolibocka Forest in Poland where the Bielski brothers Tuva (Daniel Craig), Zisel (Lev Schreiber) and Asael (Jamie Bell) manage to set up camp and vow to help any Jews who escape the Nazi occupation. Enduring several years of fighting, harsh weather, sickness, and little food, they continue to overcome inhumanity and certain death for themselves and more than 1200 other Jews.

The Warsaw Ghetto Uprising was the 1943 act of Jewish resistance that arose within the Warsaw Ghetto in Poland beginning on April 19. This  largest single revolt by Jews during World War II ended on May 16 with  the burning of the Ghetto by the Nazis.

The JHMOMC is a tax-exempt organization under Section 501 (c)(3) of the Internal Revenue Code. The Museum is handicapped and assisted listening accessible.