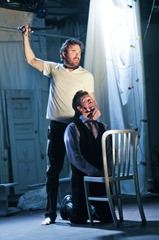 “We all think we know Hamlet, but watching Hamlet by Bedlam you really feel you are watching this classic for the first time,” says Olga Levina, Artistic Director, JCTC. “When I think of professional theatre in the 21st century, I think of Bedlam and presenting their Hamlet at White Eagle Hall brings the Jersey City theatre scene to a whole new level.”

Founded in 2012 by Artistic Director, Eric Tucker and Managing Director, Kimberly Pau Boston, Bedlam is now a leading off-Broadway theater company known for its innovative, stripped down re-imaginings of classic plays. Bedlam’s productions have been noted as Ben Brantley’s “Critics’ Picks” for The New York Times six times, included on The New York Times “Top Ten Best Show Lists” two times, and have been featured on similar lists of The Wall Street Journal and Time magazine. The Wall Street Journal named Eric Tucker as “Director of the Year” in 2014.

Hamlet by Bedlam at White Eagle Hall is a revival of the famed production, directed by Tucker. Theater critics issued numerous accolades for Bedlam’s original retelling of the Prince of Denmark’s fatalistic story.

In addition to being a revival, the White Eagle Hall show is the opening run for an upcoming national tour of Hamlet by Bedlam. "I’m excited because we’ve been doing these shows for five years and ready to launch our first national tour with JCTC and White Eagle Hall,” says Tucker. “Now with a different cast, the work is new all over again.”

Originally constructed in 1910, the newly restored White Eagle Hall is an impressive new venue for arts and entertainment, including theatre, concerts, performances and other events in the New York/New Jersey Metropolitan area. White Eagle Hall features complete food & beverage service, with two bars on the mezzanine level and one on the balcony level. The restoration enhanced the intimacy and charm of this historic venue while adding the latest in sound and lighting technology, creating a distinctive and memorable audience experience.

Funding for Jersey City Theater Center is made possible by generous support from the Hudson County Office of Cultural & Heritage Affairs/Tourism Development, Thomas A. DeGise, Hudson County Executive and the Hudson County Board of Chosen Freeholders and the New Jersey State Council on the Arts.

Funding is also made possible through the generosity of Ben LoPiccolo Development Group, JCTC’s Board of Directors, private donors and local Jersey City businesses.