Dreamcatcher debuts "What Stays" on February 8

What Stays
by Laura Ekstrand and Jason Szamreta

This heartwarming comedy, written by two members of Dreamcatcher’s ensemble, was inspired by stories from the company’s own lives and woven to reflect the common experience of a family going through a major life change. 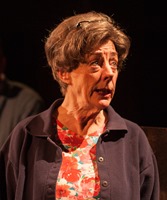 In the play, Dorothy has two days to finish packing up the family home and move to a new condo, so she’s called in her adult children to help with the task. When several unexpected visitors show up as well, the job becomes even more complicated. What they don’t know is that in the course of their visit, she plans to reveal to them something that she’s kept hidden for decades. What she doesn’t know is that nearly everyone in the house has secrets of their own. Ultimately, the family will discover the cost of hiding the truth and the cost of telling it. Together they’ll decide what stays with them and what will be left behind. (Above: Noreen Farley)

This is Ekstrand and Szamreta’s first collaboration, but Ekstrand has previously written The Neighborhood (book and lyrics) with composer Joe Zawila for the Dreamcatcher company, along with several other plays that have been produced throughout the metropolitan area.

Parking is available in the lot behind the theatre at 20 Ashwood Avenue and at the Summit Recreation Center, 100 Morris Avenue. The facility is wheelchair accessible. Assistive listening devices for the hearing impaired and advance large print scripts are available for free by prior arrangement.

Dreamcatcher was founded in 1994 as a non-profit professional ensemble of actors, a subset of whom perform in every production. The mission of our ensemble is to build community with the audience by sharing contemporary, life-affirming stories that challenge, energize and entertain. We seek to expose theatregoers to ideas and lives like and unlike their own, to awaken their imaginations and create empathy for others. The company focuses on deepening the experience of our patrons by supplementing the performances with personal contact through receptions, talkbacks and interactive programs.

Dreamcatcher's core company of professional local actors performs contemporary work that entertains and challenges, and has at its heart a belief in the essential goodness of people. The company’s activities include mainstage productions, improv comedy and cabarets, new play readings and a variety of educational and senior outreach programs.

Dreamcatcher’s programs are funded by the New Jersey State Council on the Arts/Department of State, a partner agency of the National Endowment for the Arts; the Geraldine R. Dodge Foundation; Dramatist Guild Fund; The Summit Area Public Foundation; the Manley-Winser Foundation; and many other corporations, foundations and individuals. Dreamcatcher Repertory Theatre is an Equity Producing Theatre member of the New Jersey Theatre Alliance.

Dreamcatcher Repertory Theatre, Inc. is a 501(c)(3) corporation, incorporated under the laws of the State of New Jersey.