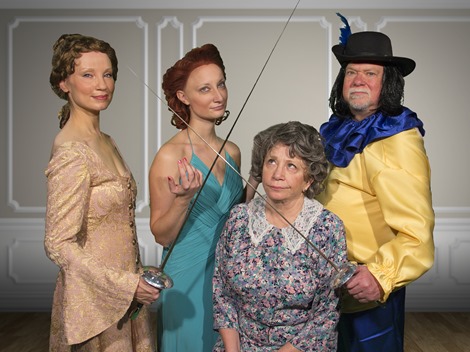 Moon Over Buffalo
by Ken Ludwig

WHEN: Fridays, Feb. 23 and March 2, at 8 p.m.; Saturdays, Feb. 24 and March 3, at 8 p.m.; and Sundays, Feb. 25 and March 4, at 2 p.m. A reception with the cast and crew follows the opening night performance on Feb. 23.
WHERE: Mercer County Community College’s (MCCC’s) Kelsey Theatre, located on the college’s West Windsor Campus, 1200 Old Trenton Road.
TICKETS: $18 for adults, $16 for seniors, and $14 for students and children.
Tickets may be purchased online at www.kelseytheatre.net or by calling the Kelsey Box Office at 609-570-3333.  (Top L-R: Maureen Hackett as Charlotte Hay, Angela Fasanella as Rosalind, Linda Cunningham as Ethel and John Pinto as George Hay)
Kelsey Theatre is wheelchair accessible, with free parking next to the theater. 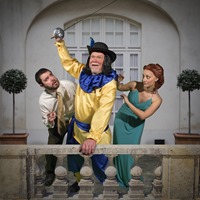 A theater couple with a last chance at stardom sets the stage for hilarious farce. Veteran stage actors George and Charlotte Hay are perilously close to the final act of their uninspired careers. Appearing at a repertory theater in Buffalo, New York, their small acting troupe is performing two stage classics in rotation: the Noel Coward comedy "Private Lives” and Edmond Rostand’s drama, "Cyrano de Bergerac.” In the middle of a marital spat, the couple gets word that a famous Hollywood director is coming to town in hopes of casting them as the replacement stars for his current film. All they need is to get their act together for one perfect performance – which may be just too much to ask of a troupe in disarray on every possible level! "Moon Over Buffalo" opened on Broadway in 1995 and ran for 309 performances.

Kelsey Theatre Artistic Director M. Kitty Getlik is taking a turn as the show's director and is having a wonderful time. "It's a play-within-a play, actually it's two plays-within-a-play, making for some very frantic and funny scenes. I am so fortunate to be working with such a talented cast. Rehearsals have been fast-paced and hilarious," she said. (Above: center John Pinto, with Tim Moran as Paul and Angela Fasanella as Rosalind)