Each winter, after a frenetic holiday season, the Paper Mill Playhouse mounts a production of a “straight” (i.e., non-musical) play. Sometimes, it’s a classic drama (The Miracle Worker); other times it’s a thriller (Sleuth) or a farce (Lend Me a Tenor) or a comedy (Vanya and Sonia and Masha and Spike). This year, the playhouse presents the East Coast premiere of The Outsider by Paul Slade Smith—just in time for the State of the Union Address.

Appropriate for the government shenanigans in DC, Smith’s broadly satirical comedy takes on the #MeToo movement, a shy Congressman’s avoidance of a town meeting, the public’s penchant for candidates who know nothing about government, the machinations of slick political brokers and the notion that appearances can be deceiving. 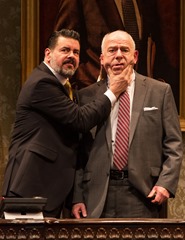 When Governor Larry Clarke (whose portrait looms over the proceedings in Act I) is kicked out of office for having sex with the runner-up of a beauty contest, Lieutenant Governor Ned Newley (right) is thrust into the job, acutely understaffed (he has but a Chief of Staff), seemingly unprepared and morbidly shy. That his swearing-in ceremony was a disaster, doesn’t bode well for this accidental Governor. Enter a pollster and political guru to save the day with a harebrained scheme to pass Ned off as a true outsider, totally ignorant of how government works, so he can keep his job—and they theirs. The problem is that Ned, math whiz and former state Treasurer, has been literally running the government for the cavorting Clarke, so he’s going to have to pretend to be a know-nothing. Upending this ruse is a ditzy temp, a principled reporter and a “real person” cameraman, all of whom help Ned find his true voice. 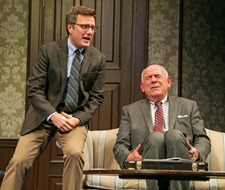 Strongly and steadily directed by David Esbjornson, the comedic chaos moves full steam ahead, with nary a dead spot. Physical comedy abets the clever dialogue and sterling performances by a very talented cast. Manoel Feliciano (left, with Lenny Wolpe) is truly terrific as Dave Riley, Ned’s right-hand man. Horrified by the scheme he’s sure will make his candidate look like a government rube, this voice of reason gamely fights back. He sputters, attempts to put the kibosh on this tomfoolery and wins our sympathy from the moment he opens his mouth. As Ned Newley, Lennie Wolpe gives a master class in physical comedy, as he quivers, mumbles and lets himself be led around by the nose—until he doesn’t. That moment got a round of applause on opening night! The one attempting to lead him, one political operative named Arthur Vance, is played with oily arrogance by Burke Moses as the man you love to hate. Nattily dressed, Moses’ smooth talker steamrolls all naysayers to reach his goal while giving cynical voice to appeal to a citizenry who, tired of government corruption, yearns to shake up matters by electing a leader who looks like an idiot. Sound familiar? The fourth standout is delightful Erin Noel Grennan (right, with Wolpe and Kelly Curran) as the malaprop-spouting, blissfully ignorant, forgetful temp Louise Peakes; whenever Grennan comes through the door, she elicits a gale of laughter from the audience. One linguistic mistake on Louise’s part sets in motion a plot development even Arthur Vance had not anticipated. And a hilarious bit with colored cards matches Grennan with Wolpe for top comedic honors! 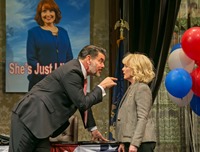 Supporting actors were equally as fine. Julia Duffy’s Paige Caldwell (left, with Moses) is a clear-eyed, calculating pollster called in by Dave Riley to help get Ned settled in his new job. That she has doubts about the outcome of Vance’s stratagem makes us feel kindlier toward her, while reviling him. Kelley Curran’s plucky Rachel Parsons provides insight to the employment stakes an ambitious television reporter risks by bucking her bosses. The chemistry between her and Dave Riley only adds to our admiration for her. And Mike Houston, as cameraman A.C. Petersen, matches Wolpe mumble for mumble until he, too, finds his voice and gives the new governor courage to reveal his true self.

A set designed by Michael Schweikardt and lit by Ben Stanton provides an appropriately august backdrop for these back-door dealings. Elizabeth Hope Clancy (costume design) and Randy Hanson (sound design) are to be commended as well.

With its very broad comedy and dripping dramatic irony, The Outsider provides laughter and delight on a cold winter evening, all with a wink and a nod to the current political situation. The packed house on Sunday night evidently concurred with me, for they were on their feet even before the actors appeared to take their bows. High drama it’s not, but The Outsider hits all the zany notes for screwball comedy and madcap mayhem. Not too shabby, I’d say.

The Outsider will be performed at the Paper Mill Playhouse, 22 Brookside Drive, Millburn, through February 18. It’s appropriate for teenagers through nonagenarians. For performance times and tickets, call the box office at 973.376.4343 or visit www.papermill.org online.