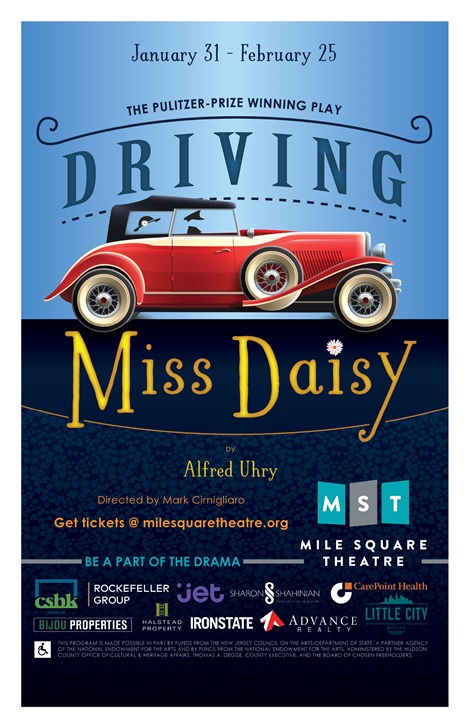 WHEN: January 31 through February 25. Wednesdays, Thursdays, Fridays and Saturdays @ 8pm, and Sundays @ 3pm
WHERE: Mile Square Theatre, 1400 Clinton Street, Hoboken
TICKETS: $30-40 • $18 students and seniors. $15 previews on 1/31 and 2/1.
Tickets available at www.milesquaretheatre.org, or by calling 201-683-7014.
Discount Parking available at The Harlow at 1330 Willow Avenue and at Little Man Parking at 1300 Jefferson Street.
For more information on Mile Square Theatre, please visit www.milesquaretheatre.org.

“When looking for a play to open the 2018 season, I was searching for a work that dealt with the tension between race and class and decided to re-read Alfred Uhry’s well-known play Driving Miss Daisy.” says MST Artistic Director Chris O’Connor. “I was moved by its heart and its strength as a work of drama. And it’s still very relevant in a time in the world when tolerance and acceptance are under assault by a rising tide of bigotry.”