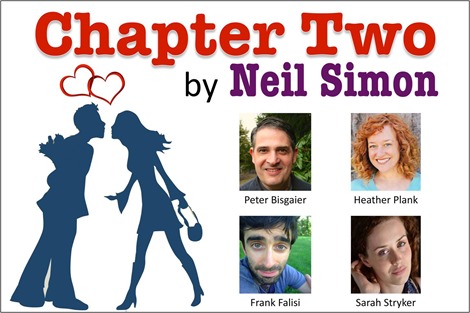 WHEN: September 15-24, Fridays and Saturdays at 8pm and Sundays at 2pm. Following the opening night performance on September 15 will be a wine and cheese reception during which audience members can mingle with the cast and production team.  Following the matinee performance on Sunday, September 17, the cast and creative team will host a talkback session when audience members can ask question and share their thoughts. On Saturday, September 23, there will be a Pre-Show wine and cheese reception that begins at 6:30pm when audience members can browse the exhibit and mingle with each other.
WHERE: West Windsor Arts Center, 952 Alexander Rd., Princeton Junction
TICKETS: $22-26 and can be purchased online at www.PegasusTheatreNJ.org or by calling 609.759.0045

George and Jennie have given up on ever finding love again. But George’s brother Leo and Jennie’s best friend Faye think they’re a match made in heaven. A misdialed phone call and an awkward, at best, extra-marital affair result in this touching and hilarious autobiographical comedy by Neil Simon about falling in love for the second time.

With Chapter Two, Pegasus continues to devise innovative uses for its unique performance space.  “One of the things we love about working at the West Windsor Arts Center is the flexibility it allows us with staging and design,” director Jennifer Nasta Zefutie commented.  “For example, whereas the traditional design for Chapter Two is to draw a line down the center of the stage and put each apartment on either side, we’re able to build two stages so each apartment is its own, self-contained playing space.”

Pegasus also continues to pair production themes with those of the artwork on exhibit during performances.  The exhibit during Chapter Two is titled “Art in the Digital Age” and explores how modern technology affects our perception of and interaction with our world and each other.  “It’s interesting to take an audience back to a time when a misdialed phone call could change your life while surrounded by art that reminds us of how modern technology impacts our interactions and communications with each other on every level,” Zefutie stated.