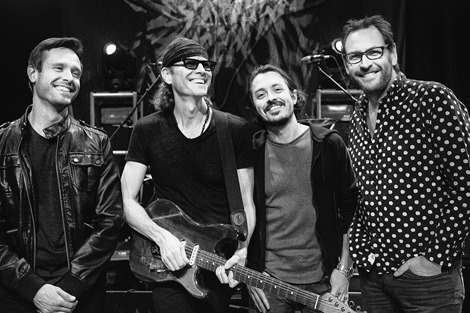 The BoDeans are playing only a handful of listening rooms in select markets, featuring performances of quieter, intimate, more stripped-down versions of classic BoDeans songs. White Eagle Hall—a newly restored historic theater—is an optimum setting for the types of shows the BoDean’s have planned for their current tour.

Perhaps best known for their catchy single, Closer To Free, the band’s accessible adult alternative sound has led to many a milestone, including a Rolling Stone Reader’s Poll for Best New American Band in 1987, support slots with U2, Bob Dylan, Paul Simon, Tom Petty, George Thorogood, The Pretenders, David Bowie and numerous others. High-profile appearances have included: Farm Aid, Summerfest, ACL Festival and others along with memorable TV appearances on “Saturday Night Live,” “Letterman,” “Today,” CNN, and ESPN.

The BoDeans have a permanent installation at the Rock and Roll Hall of Fame Museum in Cleveland as part of their Midwest Artists exhibit. After multiple chart-topping radio singles and TV placements, the BoDeans have defined a generation that embraced songs like Good Things, You Don’t Get Much, Idaho, If It Makes You, Closer To Free, Stay, and All The World.

The BoDeans signed their first recording contract with Slash/Warner Brothers Records in 1985 and their debut record, Love & Hope & Sex & Dreams was released in 1986. Since then, they have released 12 studio albums with 10 records that hit the Billboard Top 200 Chart, and numerous singles on the Mainstream Rock, Top 40 and Triple A radio charts.

In April, the band released 13, their 13th studio album. In addition, their music is now featured throughout the soundtrack of the new, critically acclaimed, Netflix original series, The Ranch, starring Sam Elliott, Ashton Kutcher, Danny Masterson and Debra Winger.

Few would’ expect Wisconsin’s favorite musical sons—and one of the key founders of the heartland rock movement—to be still going strong so many years after they first formed. But like the timeless rootsy rock they specialize in, the BoDeans have proved they’re as energetic and determined as they were on day one. The BoDeans have survived the ups and downs of the music industry, remaining true to their sound and their style for three decades and showing no signs of slowing down.

Originally constructed in 1910, the newly restored White Eagle Hall is an impressive new venue for arts and entertainment, including concerts, theater, performances and other events in the New York/New Jersey Metropolitan area. White Eagle Hall features complete Food & Beverage service, with two bars on the mezzanine level and one on the balcony level. The restoration enhanced the intimacy and charm of this historic venue while adding the latest in sound and lighting technology, creating a distinctive and memorable audience experience.