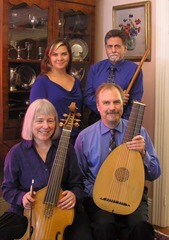 MEASURE FOR MEASURE: THE MUSIC OF SHAKESPEARE’S PLAYS

WHEN: Sunday, September 24, at 2pm
WHERE: Sitnik Theater of the Lackland Performing Arts Center, 715 Grand Ave., Hackettstown
TICKETS: $22.50 for adults and $15 for students and children under 12 in advance. Ticket prices increase $5.00 the day of the performance.
For more information or to purchase tickets visit www.centenarystageco.org or call the Centenary Stage Company box office at (908) 979 – 0900.  The box office is located in the Lackland Performing Arts Center; 715 Grand Ave. Hackettstown, NJ.  The box office is open Monday through Friday from 1–5 pm and two hours prior to each performance.

The musicians (Peter H. Bloom, renaissance flute; Carol Lewis, viola da gamba; Olav Chris Henriksen, renaissance lute; and mezzo-soprano Burcu Gulec) display versatility and dramatic flair in everything from love songs and comic antics to madness and tragedy.    Praised by The Portland Press Herald as “the perfect Elizabethan evening,” the concert features music by leading composers of Shakespeare’s time (Robert Johnson, Thomas Morley, and others), with selections from As You Like It, Twelfth Night, Henry V, The Winter’s Tale, The Tempest, Hamlet, Othello and Macbeth.

Hailed for “vitality and character…style and verve” (MusicWeb International), and now celebrating its 32nd season, Ensemble Chaconne concertizes internationally, with tours in England, Ontario and across the United States. The group has performed at the National Gallery in London, the Royal Shakespeare Company’s residency at Davidson College, the Edison Theatre in St. Louis, Spivey Hall in Atlanta, the Bach Festival Society of Winter Park Florida, the National Gallery of Canada in Ottawa, Jordan Hall in Boston, and many other venues.

Mezzo-soprano Burcu Gulec has performed in the United States and abroad, in New York, Boston, Detroit, Seattle, and throughout Turkey (Ankara, Antalya, Kastamonu, other cities). Acclaimed for charisma, versatility, and impressive vocal range, she has appeared with Grammy-nominated Mehmet Ali Sanlıkol, Robert Larabee, the early music/world music group Dünya, and other noted ensembles.

Among the many selections in the Shakespeare concert are “The Willow Song” sung by Desdemona in Othello; “It Was a Lover and His Lasse” (As You Like It); “O Mistress Mine” (Twelfth Night); “Full Fathom Five” (The Tempest); “Go from My Window” from Ophelia’s mad scene in Hamlet; and “Greensleeves,” the famous ballad tune (quoted in The Merry Wives of Windsor).  Additional selections feature songs from the “Sundry Plays”; Cymbeline and Measure for Measure, as well as, an entire assortment of songs featuring the work of composer Thomas Morley.

The 2017-2018 season of performing arts events at the Centenary Stage Company is made possible through the generous support of the Geraldine R. Dodge Foundation, the NJ State Council on the Arts, the Shubert Foundation, the Blanche and Irving Laurie Foundation, the Sandra Kupperman Foundation, and CSC corporate sponsors, including Premier Season Sponsor Heath Village Retirement Community, Silver Sponsors Hackettstown Medical Center, Home Instead Senior Care (Washington), The Holiday Inn in Budd Lake, The House of the Good Shepherd, Fulton Bank of New Jersey, and Centenary Stage Company members and supporters.