Spitting In The Face Of The Devil

Can you imagine discovering that your father is a predator?

For the first theatrical show in its new Fear Series, Jersey City Theater Center (JCTC) presents Spitting In The Face Of The Devil, a daring, uplifting and often comedic solo show by acclaimed monologist Bob Brader. 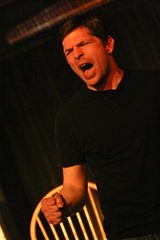 A portion of the Artist’s proceeds from the JCTC presentation will be donated to Prevent Child Abuse New Jersey, a nonprofit organization dedicated to preventing child abuse and neglect in all forms for all New Jersey children. (www.preventchildabusenj.org)

JCTC selects topics global in scope yet relevant to the community then explores that theme using visual arts, theater, dance, monologues, and other performances. With Fear—the first (of three) series of its 2017/2018 series—JCTC presents subject matter that exists on both internal and external levels and is relevant to individuals and communities alike.

“Spitting In The Face Of The Devil is a deeply honest piece of work,” said Olga Levina, Artistic Director, JCTC. “Childhood is a very fragile stage of life and your parents can make or break you. Bob’s story is not just one of trauma, but also struggle, perseverance, and overcoming adversity.”