MEASURE FOR MEASURE
by William Shakespeare

WHEN: Friday, June 23 and 30, at 8 p.m.; Saturday, June 24 and July 1 at 8 p.m., and Sunday, June 25 and July 2 at 2 p.m. A reception with the cast and crew followed the opening performance on June 23.
WHERE:  Mercer County Community College’s (MCCC’s) Kelsey Theatre on the college’s West Windsor Campus at 1200 Old Trenton Road
TICKETS: 18 for adults; $16 for seniors; and $14 for students and children.
Tickets may be purchased online at www.kelseytheatre.net or by calling the Kelsey Box Office at 609-570-3333.
Kelsey Theatre is wheelchair accessible, with free parking available next to the theater.

“Some rise by sin, and some by virtue fall,” proclaims Shakespeare in Measure by Measure.

Set in Vienna, “Measure for Measure” explores some of society’s big moral questions—the abuse of power and merciful justice, hypocrisy and virtue, and forgiveness and repentance. Mistaken identifies abound, as Shakespeare tells his morality tale with a cast of colorful characters including murderers, pimps, politicians, whores, nuns and nobles. 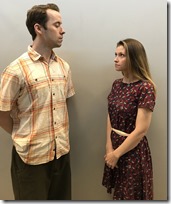 The cast features John Bergeron of Pennington as Duke Vincentio; Ray Fallon of Collingswood as Angelo; Christopher C. Gibbs of Fanwood as Escalus; John Fischer of Hamilton and Michael Krahel of Hillsborough sharing the role of Claudio; Andrew Timmes of Princeton as Lucio; Scott Karlin of West Windsor as Provost; Todd Gregoire of Levittown, Pa., as Friar Peter; Timothy Kirk of Delran as Pompey; Russ Walsh of Morrisville, Pa., as Elbow/Abhorson; Ernie Albanesius of Chesterfield as Froth/Barnardine; Morgan Petronis of Ewing as Isabella; Amanda McCarther of Princeton as Mariana; Kyla Mostello Donnelly of Levittown, Pa., as Mistress Overdone; Kelly Colleran of Wayne as Juliet; Erin Leder of Bordentown as Sister Francisca; and Jenna Burke of Ringwood as Kate Keepdown. (Above, left: Ray Fallon of Collingswood stars as Angelo and Morgan Petronis of Ewing is Isabella)

Says Stage Manager Lili Timmes, “Measure for Measure is a timely, scathing look at the distinction between good and evil and our perceptions of them both. Theatre-goers can expect a take on Shakespeare's work that will leave them questioning their own moral compasses while laughing their way out of the theater.”

United by a common love for classic theater, Shakespeare ’70 has produced 40 years of Shakespeare classics, spanning three generations of actors, directors and technical crew. For many years, the company has closed out the Kelsey Theatre season with one of the Bard’s great works.