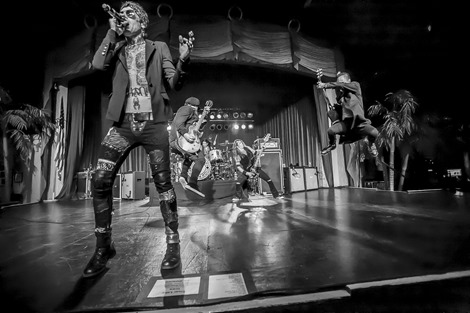 The White Eagle Hall show is one of only a handful of East Coast dates by Buckcherry, who returns to the road after a six-month hiatus from live performances. "The East Coast is where Buckcherry has sold the most records,” said Josh Todd, Buckcherry’s front man. “It’s where it all began for us and this is something that I never forget. When we do shows there it always brings out the X factor."

Founded in 1995, the Los Angeles hard Rock quintet, known for their riotous energy, sexy swagger, and primal chops, is responsible for smash hits including Lit Up off their gold-certified 1999 self-titled debut as well as Crazy Bitch and Sorry from 2006's platinum-selling 15. Along the way, they've shared stages with everybody from AC/DC and Mötley Crüe to Slipknot and Rob Zombie as well as festival bills including Bamboozle with Bon Jovi, In-N-Iron, and Sturgis. Buckcherry’s recent release Rock 'n' Roll—the group’s seventh full-length album—staunchly upholds the commandments of rock music with an arsenal of new anthems primed to explode on impact.

Originally constructed in 1910, the newly restored White Eagle Hall is an impressive new venue for arts and entertainment, including concerts, theater, performances and other events in the New York/New Jersey Metropolitan area. White Eagle Hall features complete Food & Beverage service, with two bars on the mezzanine level and one on the balcony level. The restoration enhanced the intimacy and charm of this historic venue while adding the latest in sound and lighting technology, creating a distinctive and memorable audience experience.