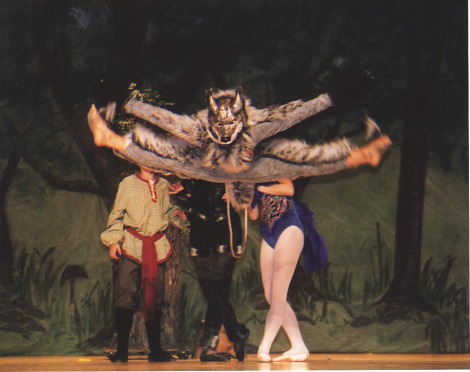 PETER AND THE WOLF
THE MAGIC TOY SHOPPE

WHEN: June 4th at 4:00 PM
WHERE: Sitnik Theater, Lackland Center, 715 Grand Ave., Hackettstown
TICKETS: Tickets for this wonderful Children’s Matinee can be purchased by calling 908-850-0709.

As the theatre darkens the beloved tale of Peter and Wolf come to life onstage, with a surprise ending this ballet will delight children ages 4 – 104.

Sponsored in part by a grant from the Warren County Cultural and Heritage Commission, the company presents a new original ballet, The Magic Toy Shoppe.

This a tale of an eccentric French toy maker and his automated collection of dolls. The exquisitely carved dolls range from a talking baby doll, to a collection of high-kicking Cossack dolls from Russia.  This clever shopkeeper desperately tries to sell the dolls but to no avail. Saving his favorite dolls for last, he finally presents his latest creation; a two Can-Can dolls. Each family purchases the dolls separately and plan to return the following day to pick-up their possessions. The secret life of dolls is revealed during the night as they come to life. It is obvious that the Can-Can dolls are lovers and sad to be separated. An escape is planned, and the couple flees the shop. Morning returns, and we find angry customers accusing the toyshop keeper of stealing their money. All the dolls come to life and frighten the angry customers away.

International guest artists include Vitaly Verterich as the shopkeeper, and Narek Martirosyan as the male Can-Can doll. Verterich has performed with The Russian National Folk Dance Company, and has been a guest artist at the Bolshoi Ballet and the Kirov Ballet. He was a principal dancer in Michael Flatley’s  “Riverdance the Show.” After touring for two years throughout Europe, Australia, Canada and America, the show opened on Broadway in the Gershwin Theater and was renamed “Riverdance on Broadway.”

Narek Martirosyan has performed as a principal dancer for the Armenian National Ballet Theatre and was awarded the Moves Khorenatsi Medal by the Prsident of Armenian for his significant contributions to the development of culture and outstanding staging of the ballet Spartacus. Other principal positions included the Israel Ballet and currently, the New Jersey Ballet.

Kayla Walsh from Mt. Olive, NJ will dance the female Can-Can doll. Kayla received her training at the North Jersey School of Dance Arts, under the direction of world renowned Luba Gulyaeva from the Kirov Ballet. She has performed multiple rolls with the New Jersey Civic Youth Ballet, including Dew Drop in their annual Nutcracker performance at the Sitnik Theatre.