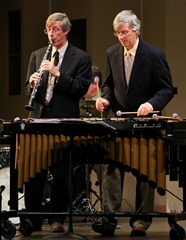 WHEN: Monday, June 5, 7:30 p.m.
WHERE: Bickford Theatre, 6 Normandy Heights Rd., Morristown
TICKETS:  $17 in advance and $20 at the door.
Tickets may be purchased online at morrismuseum.org, by phone at (973) 971-3706, or in person at the Bickford Theatre Box Office. The Morris Museum’s Bickford Theatre is located at 6 Normandy Heights Road inMorristown, NJ, and offers free parking and full accessibility. Box office hours for phone sales are Monday through Friday, 10:00am to 5:00pm. Walk-up hours are Tuesday through Friday, 11:00am to 5:00pm.

Neville Dickie, one of the greatest boogie-woogie and stride pianists to ever come out of Britain, will be reunited with New Jersey’s own Midiri Brothers at the Bickford Theatre.

Since his “Back to Boogie” album became a hit in the 1970s, Neville Dickie has been performing all over the world and makes time for a tour of the United States every year. For the past couple of years, he has appeared with Paul and Joe Midiri including a stop at the Morris Museum’s Bickford Theatre. He and his wife Pat ran one of England’s most successful jazz club, The Sutton Jazz Club, for 27 years until finally retiring from the business in 2016. He now devotes his time to recording, performing, and enjoying life with their two poodles.

Joe and Paul Midiri (above, right) grew up in Runnemede, New Jersey, where their musical training began. With Joe playing the clarinet and Paul sitting behind the drums, the two brothers (twins actually) honed their skills playing in a swing band. Paul eventually turned to the vibes as his primary instrument and the two have become acclaimed jazz musicians across the country. Joe Midiri cites several legendary musicians as his instrumental heroes including Benny Goodman, Artie Shaw, Ben Webster, and Paul Desmond. Not surprisingly, Paul’s inspirations including Lionel Hampton and Red Norvo. Billed as The Midiri Brothers, the two New Jerseyans headline at hot jazz festivals around the country.

The Midiri Brothers have teamed up with British piano star Neville Dickie for the past several years and always look forward to the opportunity. “With Neville,” said Paul Midiri, “we seem to push the boundaries of all types of classic jazz including trad, boogie-woogie, and swing. He is a tremendous musician and we look forward to this annual opportunity to perform with him. We relish these dates because we’re never sure if he will agree to leave his lovely wife Pat, their two poodles, and their comfortable home in England to come every year to play in the States. But here he is and we couldn’t be happier.”