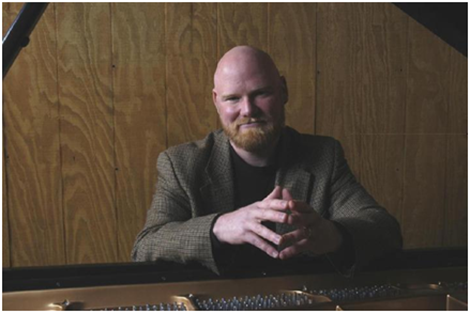 WHEN: Monday, April 3, at 7:30 p.m.
WHERE: Bickford Theatre, 6 Normandy Heights Rd., Morristown
TICKETS: $17 in advance and $20 at the door.
Tickets may be purchased online at morrismuseum.org, by phone at (973) 971-3706, or in person at the Bickford Theatre Box Office.
The Morris Museum’s Bickford Theatre is located at 6 Normandy Heights Road in Morristown, NJ, and offers free parking and full accessibility. Box office hours for phone sales are Monday through Friday, 10:00 am to 5:00 pm. Walk-up hours are Tuesday through Friday, 11:00 am to 5:00 pm.

Scott Joplin, the King of Ragtime, died 100 years ago on April 1st and the Bickford Theatre pays homage to his memory with critically-acclaimed pianists Jeff Barnhart (above) and Richard Dowling.

Although he died penniless, Joplin is credited with setting the standard for ragtime compositions and his hit, “Maple Leaf Rag,” revolutionized American music. As a pioneer composer and performer, he helped pave the way for young black artists to reach a broad audience both white and black. But after his death in 1917, his popularity gave way to other forms of jazz and he was mostly forgotten until the sixties when Joshua Rifkin led the way to a Joplin revival. Then in 1973, the popularity of the move The Sting catapulted the Joplin composition “The Entertainer” to the top of the charts and earned an Oscar for Marvin Hamlisch for Best Original Song, even though Hamlisch took the song directly from Scott Joplin. Scott Joplin has now received the credit he deserves with an induction into the Songwriter’s Hall of Fame, a special Pulitzer Prize, his own postage stamp, and a star on the St. Louis Walk of Fame.

On Saturday, April 1, Carnegie Hall will commemorate the 100th anniversary by presenting Richard Dowling in concert with the first public appearance in history of The Complete Piano works of Scott Joplin. Dowling appears regularly across the country in solo recitals, chamber music programs and as a guest soloist with orchestras. His recordings include works by George Gershwin, Frederic Chopin, Camille Saint-Saens, Gregor Piatigorsky, and Scott Joplin.

Dowling will be joined by his fellow pianist Jeff Barnhart (right), considered by critics to be the premier stride pianist performing today. With a concentration on hot jazz, Barnhart appears as a soloist, guest artist, and pianist in a variety of bands including a recent appearance at the Bickford Theatre with clarinetist Dan Levinson.

“I’m looking forward to saluting Scott Joplin with the remarkably talented Richard Dowling,” said Jeff Barnhart. “I know the audience will enjoy our different interpretations of Joplin’s rags since we each have our unique styles. This concert is an opportunity for us to some fun with renditions of some of the greatest rags ever written. The intimacy of the Bickford Theatre makes it a perfect place to let loose. We will definitely draw on many of the ragtime favorites, playing individually, as a duo and even with the two of us on one piano.”