Of the three types of plays Shakespeare wrote—comedies and tragedies being two—the third, histories, can be the most problematic for modern American audiences. Filled with arcane details of royal family trees, shifting allegiances among aristocrats and murder as a political solution, they can be confusing and, well, often boring. 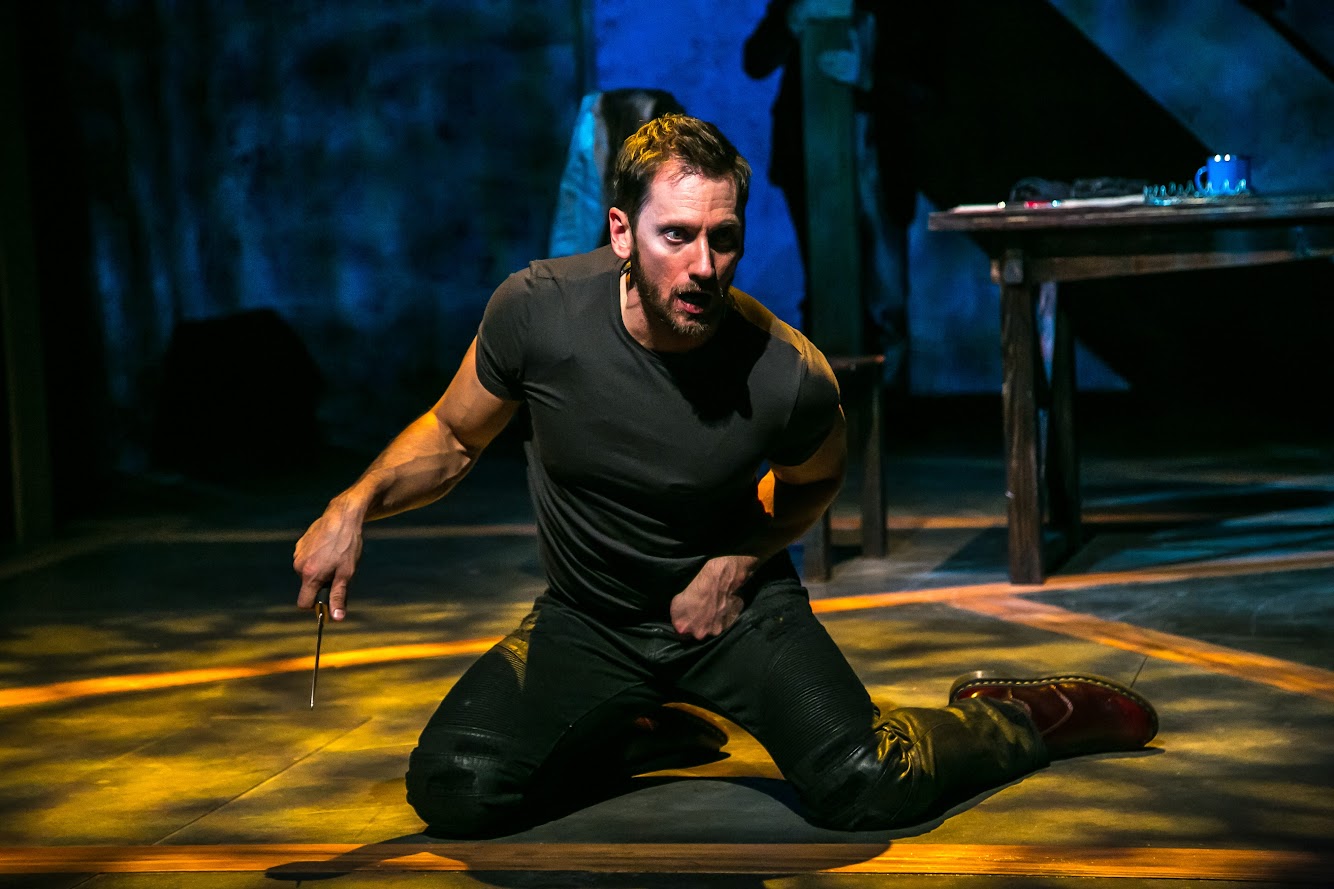 But not Richard III, The Bard’s play about the final years of the Wars of the Roses that pitted the Houses of Lancaster and York in a civil war that lasted for decades. What makes this particular history play so compelling is the character of Richard, Duke of Gloucester, who announces in the very first scene that if he cannot be a lover (because of his physical appearance), he will be a villain. Throughout the rest of the play, he does just that, putting out contracts against his brother, his young nephews, loyal lords and even his wife! The result is a blood bath conducted by a seductive, malevolent man, and all the while, we are in on it; we almost feel like accomplices to the crime as Richard often turns toward us (and even speaks to us directly) with a knowing smile, as if to say, “You know what I’m up to; just watch me do it.” (Above: Derek Wilson as Richard faces his final battle.)

The Shakespeare Theatre of New Jersey performed Richard III a decade ago, with Paul Mullins in the title role. Now, in the 25th year of his association with the troupe, Mullins returns to direct the play—and what a tour de force it is! As exhausted as we may feel by the end of the evening, it is exhilarating to watch Richard, played smashingly by Derek Wilson, slash and bash his way to get what he wants, only to end up alone on the battlefield calling for “a horse, a horse; my kingdom for a horse.” It is a fitting end for a very intelligent, albeit evil, man. 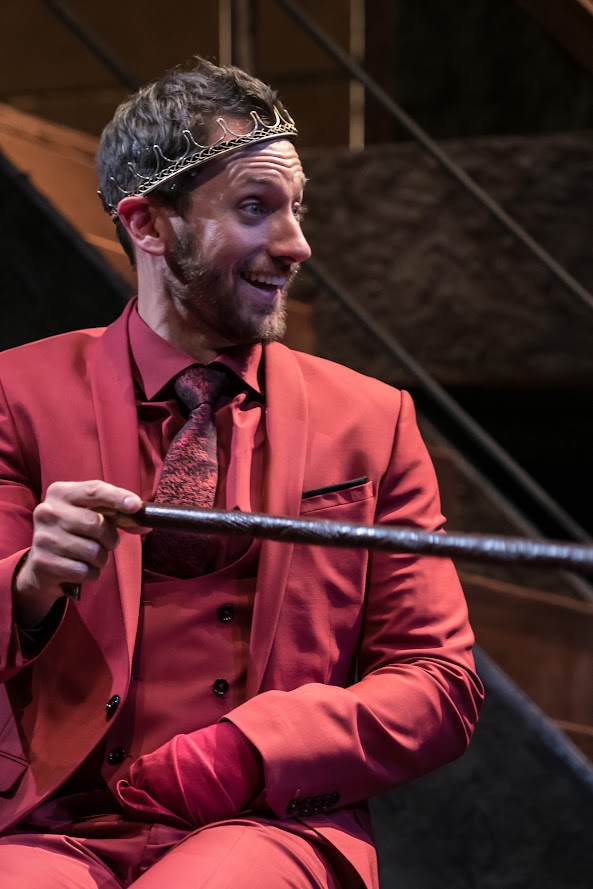 Richard III involves the jockeying for the throne of England when, following the death of Lancastrian King Henry VI and his heir,  Edward, the “son of York,” ascends the throne. Although he and his wife Elizabeth have produced an heir, Edward’s brother Richard (Derek Wilson, left) lusts for the crown and resolves to get it by hook or by crook. To do so involves getting his older brother George, Duke of Clarence, out of the way, along with Edward IV’s two young sons Edward and Richard. To cement his ties to the House of Lancaster, he woos and weds Lady Anne, wife of the former Prince of Wales, and to be sure that none of his court will get in his way, he “offs” them one by one, using the thuggish Catesby and his sidekick Ratcliff. All is for naught, however; a scion of the Welsh House of Tudor, Henry of Richmond, gathers an army to oust Richard, brings about the king’s demise at the Battle of Bosworth and is crowned Henry VII, bringing the War of the Roses to an end and beginning the Tudor dynasty to which Shakespeare’s patron, Queen Elizabeth I, belongs.

Mullins’ decision to dress the actors in modern attire does not detract from the play’s historicity; in fact, it makes it more accessible to a modern audience and points up the fact that attire may change, but human nature does not. Oh, we may not use murder as a political tool anymore, but certainly the ability of words to kill reputations and self-esteem is a pretty good substitute. Kristin Isola is to be commended for the costumes worn by the actors; there is a great deal of black and gray, with touches of burgundy and teal, all the better to show off the blood that flows from the victims’ mouths when they are stabbed or garroted. 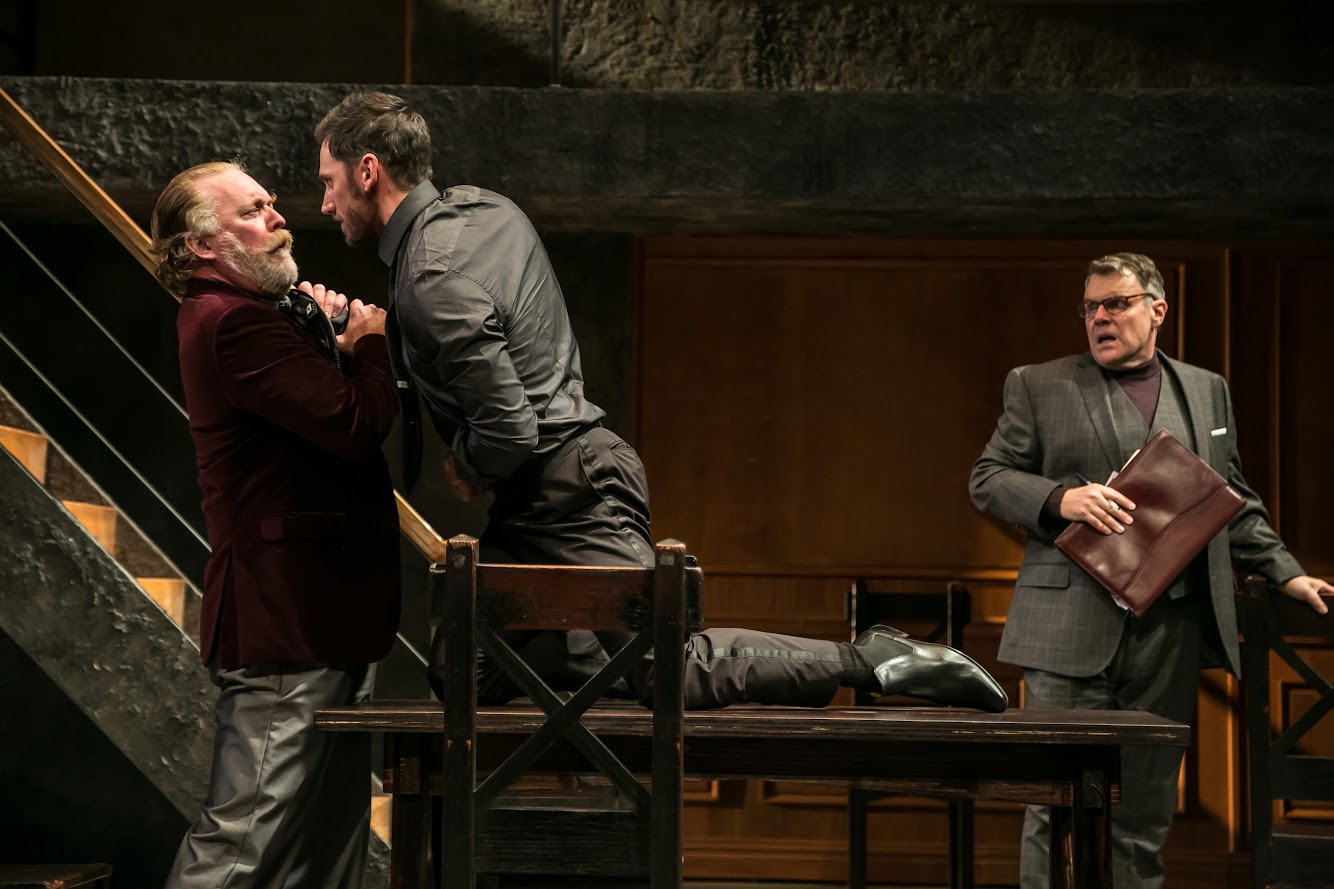 The super-talented cast pulls off this blood bath with great energy and superior acting skills. Derek Wilson is a wily, often charming, monstrous Richard, a man who courts a woman over the corpse of her late father-in-law, efficiently has his own brother killed, and institutes a court climate where murders are casually accepted as a fact of life. His knowing, malevolent glances at the audience add to the dramatic irony with which the play virtually drips. He moves around the stage agilely, despite his crabbed posture and slight hump—his intelligent, quick-thinking mind in full view. He is the embodiment of former Queen Margaret’s description of him as “Hell’s black intelligence.” (Above: Ames Adamson as Hastings is threated by Derek Wilson as Richard and Chris Heitkko as Lord Stanley) 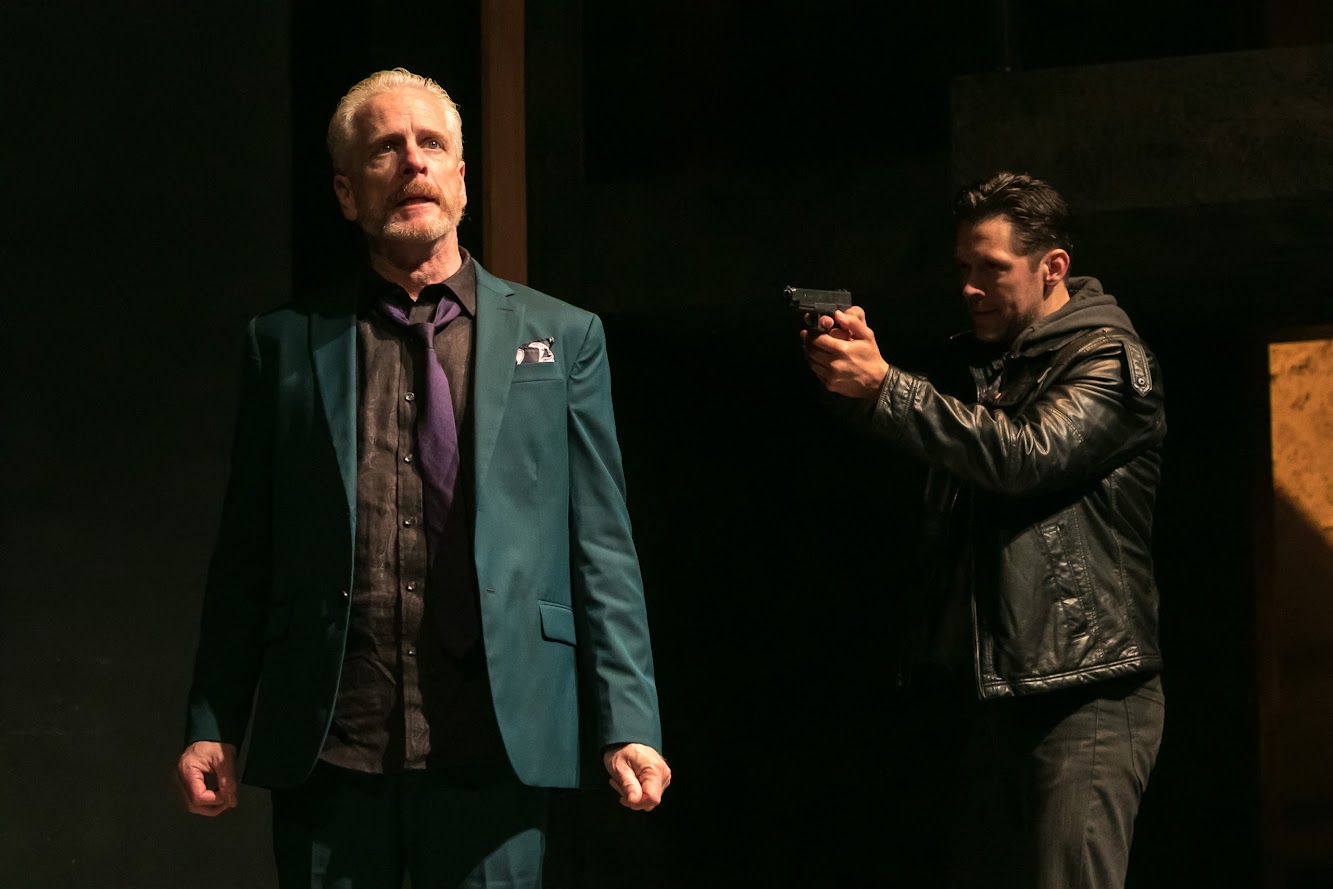 Mullins doesn’t stint in his selection of actors in supporting roles. Chris Hietkko is fine as the short-reigned Edward IV; John Keabler wrings great pathos from the role of George, Duke of Clarence, totally unaware of what awaits him in the Tower of London. As loyal Lord Hastings, Ames Adamson is appropriately obsequious in his support of Richard; what he wants is some land and stature and is not above kissing up to the monarch to get it. Sheffield Chastain’s Catesby is the quintessential hit man; he has no qualms about the dirty business he’s enlisted to perform; whatever Richard asks, even killing children, he’ll do. And John Hickok, masterful as the powerful Duke of Buckingham, bows and scrapes in obeisance to Richard, but has the foresight to get out when the going gets really bad. (Above: John Hickok and John Keabler) 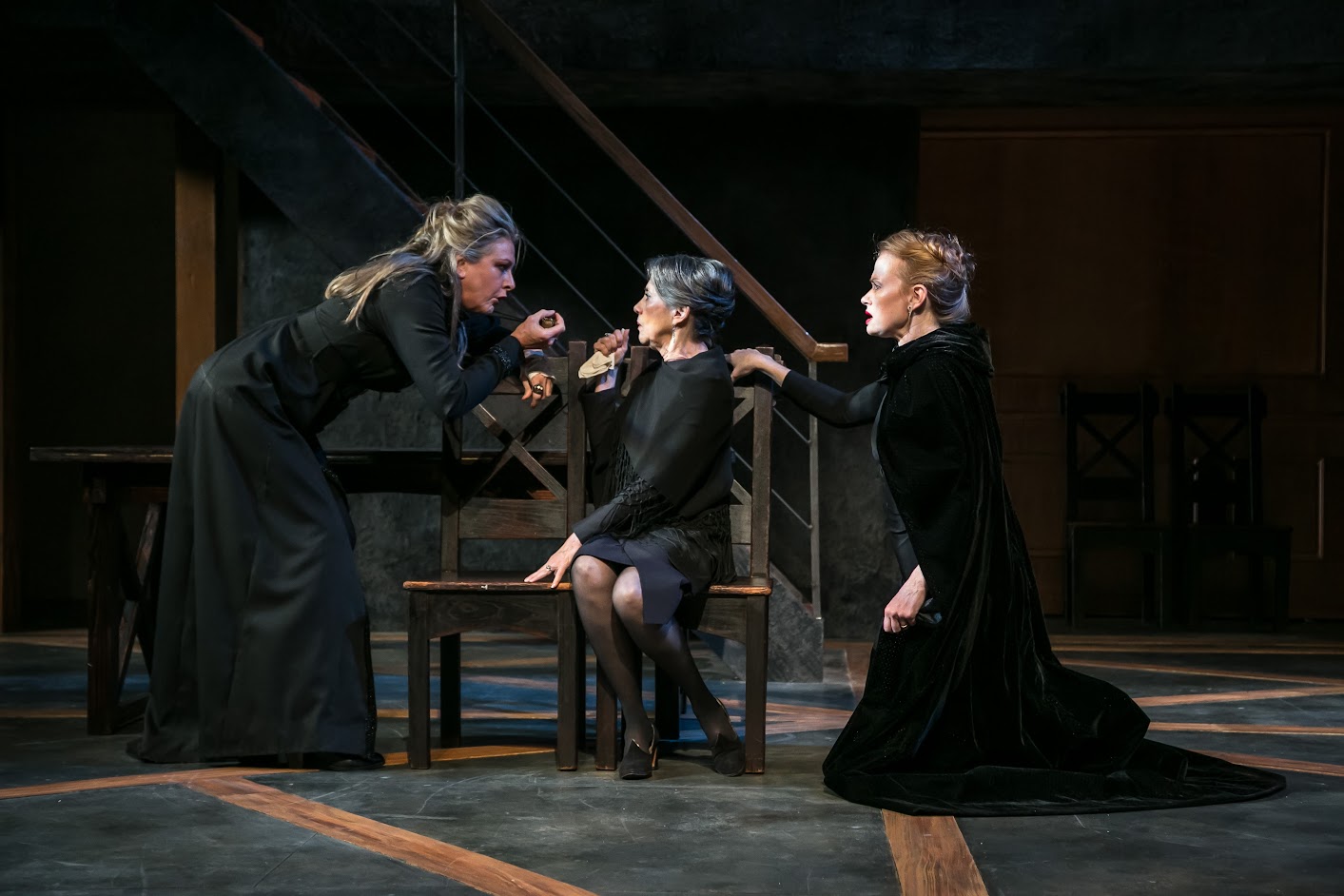 Yet it is the three woman in the play who are Richard’s most formidable foes, and the performances by Carol Halsteadt, Gretchen Hall and Ellen Fiske almost steal the show. Halsteadt is chilling as the Yorkist widow, Queen Margaret, whose husband and son have been killed in battle by Richard. Dressed in a long black coat and boots, she strides around the stage, uttering curses and stabbing her palm to make her desire for revenge palpable. In the role of Duchess of York, Fiske is especially tragic: As mother to Edward, Clarence and Richard, she must face the loss of the first two and the dastardly deeds of the third. Obviously, she has always disliked Richard, probably because of his disabilities (hunchback, withered hand, pronounced limp), and she doesn’t hold back in letting him know it. We can only imagine the childhood that turned Richard into such a villain. And Hall’s depiction of Queen Elizabeth, widow of Edward and mother to the little boys, goes from imperiously arrogant to disconsolate. The scene where the three women—dressed in black, they resemble three crows—curse Richard and commiserate with each other is powerful and poignant. (Above, Carol Halsteadt, Ellen Fiske and Gretchen Hall)

As the fourth queen, Amaia Arana’s portrayal of Lady Anne, wooed and won by Richard, grows in strength from the moment she spits at him when he proposes. Although she weds him, her looks of disapprobation certainly convey hatred for her husband.

These machinations play out on a stark, modern set designed by Brittany Vasta and atmospherically lit by Tony Galaska. The stone walls and unfussy staircase allow us to focus on the Bard’s words, character development  and the performances. The only clue that this is a royal court is a large crystal chandelier. The staging of the Battle of Bosworth is especially intriguing, taking place on two long tables pushed together, with Richard at one end and his nemesis Henry Tudor at the other. No groups of soldiers here; just two men ready to duke it out for the throne of England. Richard’s final call for a horse is both pathetic and fitting. (Above: Ames Adamson, Derek Wilson, John Keabler, James Suggitt, Amaia Arana and John Hickok)

In 2012, Richard III’s skeleton was found under a parking lot in the English city of Leicester. Perhaps the most interesting fact ascertained is that Richard was not hunchbacked, and by all accounts, Richard was a good king. So why is he portrayed that way? Well, history is often written by the victors, and it was to Shakespeare’s benefit to turn Richard into a deformed monster to please his Tudor queen. Indeed, he has Richard describe himself as "deformed, unfinished ... and that so lamely and unfashionable that dogs bark at me as I halt by them." This man is very self-aware.

Although we cannot take Richard III as historical fact, the play remains an excellent example of drama with a thoroughly unredeemable arch-villain who insidiously seduces the audience into being both admiring and appalled by his nefarious deeds. Once again, the Shakespeare Theatre of New Jersey brings this bloody, yet attractive, portrait of a politician (okay, a king) who will stop at nothing, not even murder, to get what he wants—and do it brilliantly.

Richard III will be performed at the F.M. Kirby Shakespeare Theatre, 36 Madison Avenue, Madison (on the Drew University campus) through November 6. For information and tickets, call the box office at 973.408.5600 or visit www.ShakespeareNJ.org online.

NOTE: In today’s New York Times is an article linking Richard III to this year’s election. You might find it interesting. You’ll find it HERE/