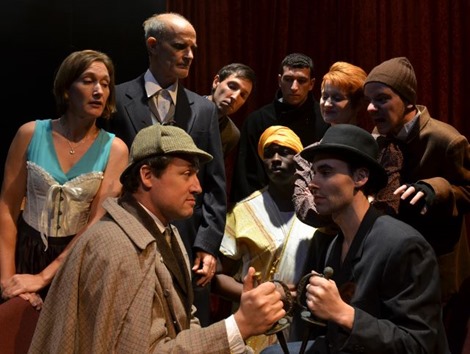 We never seem to tire of Sherlock Holmes. Except for Sir Arthur Conan Doyle, who longed to rid himself of his most successful creation, everyone seems to love the hyper-intellectual detective. He has been featured in wildly popular movies and television shows, portrayed by a plethora of actors, and has been restored by writers who have gone beyond the adventures created for him by Doyle.

In Katie Forgette’s light-weight Holmes tale, Sherlock Holmes and the Jersey Lily, which is currently being staged by the Centenary Stage Company in Hackettstown, the fictional Holmes comes face-to-face with two actual historic figures. The lily of the title is the famous actress Lillie Langtry. (She is the Jersey Lily because she came, it seems, from the island of Jersey in the English Channel.) And adding a special piquancy to the tale is playwright Oscar Wilde, a brilliant wit who, in real life, was reportedly a friend of the actress.

A colorful bit of history is used in the play to create a case that should be worthy of the attention of Holmes. Langtry, whose love life was scandalous, is alleged to have had an affair with Edward, Duke of Wales and heir to the throne at the time occupied by his mother, Queen Victoria.

The case the actress brings to the famous sleuth involves the theft of letters between Langtry and the Prince, known as Bertie, and ensuing blackmail. That’s really enough to get things started.

Of course, there is a small flock of villains who predictably turn out to be in the employ of Holmes’s nemesis, Professor Moriarty. (We wonder of what he is a professor. Nothing good, for sure.) And on the side of the good guys are Wilde and Holmes’s constant companion, Dr. Watson.

The action takes place on a wonderful, constantly changing stage set that involves rooms that rotate on a turn-table. Ashleigh Poteat is the set designer and also designed the handsome costumes.

The plot is actually silly and predictable, but the action is unflagging and entertaining, including a sword fight that is enhanced by the presence of a spiral staircase. (Why Moriarty agrees to the duel with swords is one of several head-scratchers.)

The cast is handsome and effective. Several Centenary veterans, with Broadway, off-Broadway and regional credits, do a good job, especially handling a variety of English and Irish dialects. Colin Ryan is a suave Holmes. Nicholas Wilder is equally silky as Moriarty. (He would make a good Holmes.)

Probably the best performance is by Joseph McGranghan, whose Oscar Wilde injects some delicious humor into the script. Sandy York is a lovely Lillie and Amy Griffin is terrific in a variety of roles, with a variety of dialects.

Carl Wallnau brings a light touch to directorial duties, so that the play ends with a smile. It will run at the Lackland Center on the Centenary campus through Oct. 23.

For more information or to purchase tickets visit www.centenarystageco.org or call the CSC box office at (908) 979 – 0900. The box office is open Monday through Friday from 1 – 5 pm and 2 hours prior to every performance.  The CSC box office is located in the Lackland Center; 715 Grand Ave. Hackettstown, NJ.  Centenary Stage Company can also be found on social media platforms Facebook, Twitter and Instagram.