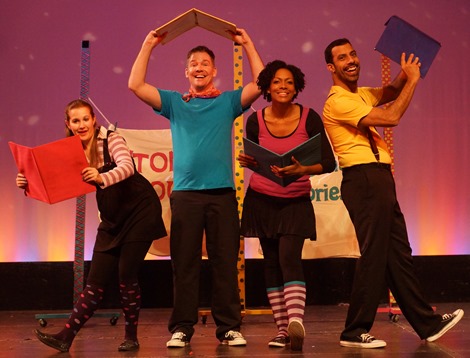 Twice nominated for an Emmy©, Pushcart Players is the recipient of numerous state and private awards for excellence and innovation. Travelling more than 2 million miles nationally and abroad—from the White House to the little red schoolhouse—the upcoming season (September 2016 through July 2017) includes seven exceptional musical productions.

“Ellis Island: Gateway to America”
takes a loving look at a small group of immigrants. They came to America in the early 1900’s, seeking freedom, opportunity and a better life for themselves, their children, and their children’s children. A combination of original and traditional American music, the play explores the ordinary people and extraordinary events in the nation’s history through the Civil Rights Movement in the 1960’s.

“Stone Soup and Other Stories”
features short literary favorites from Africa, India, Eastern Europe, and the United States of America. Filled with exuberant music, fantasy, and comic plot lines, each tale introduces the spirit and customs of these unique cultures; the production provides a springboard for reading and subsequent literacy-related activities.

“Peter and the Wolf”
Pushcart puts its trademark spin on a beloved Russian folk tale. Classical music, story-telling, puppetry, and the ageless adventure of growing up comprise this masterpiece. Set to the resplendent music by composer Sergei Prokofiev, each character is represented by a different musical motif in this story of a spirited young boy who confronts the dangers of the forest with courage, creativity, and leadership.

“The Last…Butterfly”
is a touching, informative and provocative multi-media
play with music, based on the poems, drawings, and experiences of children of the Holocaust. While dealing with a particular episode in history, the production brings relevance to current human rights issues.

“Alice in Wonderland”
is re-imagined and designed by Pushcart Players co-founder Ruth Fost, and boasts madcap characters and meaningful nonsense. On an enchanted journey of self-discovery, Alice learns to make thoughtful choices about the kind of person she wants to be.  This tale about a curious and proactive young girl has enchanted readers for many generations.

“A Season of Miracles: A Collection of Holiday Tales.”
In late November and December, Pushcart presents the perennial favorite. This charming musical presents four heart-warming tales that celebrate Christmas, Chanukah, and Kwanzaa. The production kicks off with a public performance on December 3rd for families at Union County Performing Arts Center in Rahway, NJ.

Opening in spring of 2017
“A Cinderella Tale…happily ever after”
is Pushcart’s whimsical comic version of the well-known fairy tale. The story’s origins are informed by the universal longing to overcome adversity. Certainly it speaks to everyone who has a vision or a dream yet to be fulfilled, with central themes of goodness, generosity, and compassion.

“Pushcart hasn’t been around this long by chance,” said producing artistic director, Paul Whelihan. “The company’s endurance is a testimony to both the subject matter of our productions, and to our inclusive approach with audiences. In substance and style, Pushcart embraces history, literature, the Autism spectrum, special educational needs, and values clarification for young people, their families, and their educators. That being said, the repertoire quite simply offers entertainment that is funny, thought-provoking, intelligent and enormously engaging.”

Orchestrations for the digitally recorded soundtracks to each production are created by award-winning composer, Larry Hochman, who also provides original music for many of the titles as well. Hochman is the Tony Award-winner for orchestrations for “She Loves Me” (2016 revival) and Tony and Drama Desk award-winner for “The Book of Mormon.” He received Tony nominations for “The Scottsboro Boys,” ”Monty Python's Spamalot,” (Hochman also received Drama Desk nominations for both), “Fiddler on the Roof” (2004 revival) and “A Class Act.”  Larry composed additional music for Disney’s “Little Mermaid,’ for Stephen Spielberg’s “Amazing Stories” and for numerous celebrity concerts.  Hochman’s other awards include the ASCAP Award for Musical Theater (“One Man Band”), 4 Emmy Awards for “The Wonder Pets” television series and a Bistro Award for composing “One Man Band.”