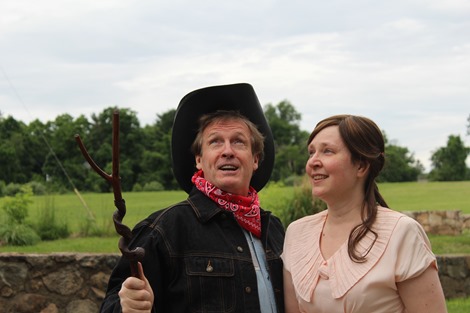 THE RAINMAKER
By N. Richard Nash

WHEN: July 29, 30, and August 4, 5, 6, 8 PM
WHERE: the outdoor amphitheater at Pleasant Valley Park, Valley Road in Basking Ridge.
ADMISSION: Admission is free, but donations are gratefully accepted. Bring lawn chairs or blankets for seating.

The play, set in a drought-ridden western state during the 1930s, tells the story of a hot summer day in the life of spinster Lizzie Curry whose brothers try to marry her off with little success, worrying both about her future and the fate of their cattle ranch  With no relief from the drought in sight, a charming, sweet-talking rainmaker, Starbuck arrives out of nowhere with the promise to bring rain for $100.  His arrival will have a profound effect on Lizzie’s life.

“The Rainmaker” opened on Broadway in 1954, with Geraldine Page and Darren McGavin. It was revived in 1999 with Woody Harrelson.  The 1956 movie starred Burt Lancaster and and Katherine Hepburn, who earned an Academy Award nomination for her role as Lizzy.  A musical version, “110 in the Shade,” opened on Broadway in 1963, receiving four Tony Nominations; the 2007 revival starred Audra McDonald.

The partnership of Trilogy Repertory and Bernards Township has produced over three decades of family entertainment and achieved several awards for both groups for excellence in theater programming.  Most prominent are the awards from ACT (Achievement in Community Theater) and the prestigious “Excellence in Cultural Arts Programming.”  “The Rainmaker” is made possible, in part, by support from New Jersey State Council on the Arts, and is presented through special arrangement with Samuel French.