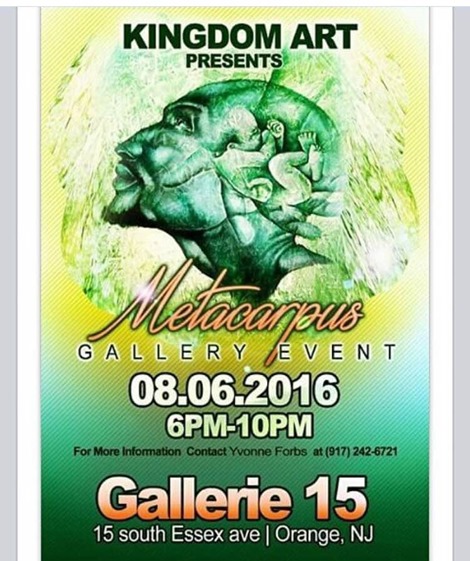 Since the age of seven, M`nard Derosena, also known as Kingdom Art,  had a burning desire for art. As a kid, Kingdom Art grew fascinated by it, always observing the beauty of life and its contents, and so came the passion of expressing everything from personal feelings to different ideas in his drawings, whether it was something beautiful to the eyes or an experience, he always sought to put them in visual aspect to portray his understanding of them. (left, with Amar'e Stoudemire)

Over the years Kingdom Art challenged himself to be at his best, do outdo previous efforts and to become better at his craft by surrounding himself with others that are blessed with the same gift. Kingdom Art have been inspired and influenced by most of them, but he has always been driven by creativity, always stretching his imagination exponentially to the extent that others wouldn't even think of, and that was his motivation. It was almost as if he was competing with others, whether it was freehand or anything he would lay his eyes on to reproduce, he`d always go above and beyond to show that he is the best, and that he was. At the age of fifteen, he came to America, he attended forest hill high school in Florida, and a year later, he moved to new jersey. Life wasn't easy, and so him and his family found themselves constantly moving, and due to the need for adapting to a new environment, he put down the pencil and the pad for awhile to settle in jobs that can secure him financially. The idea of learning a new language was also another challenge, and in a way he became so preoccupied in fitting into a new way of life, that unknowingly he stopped serving his gift to the point he could barely draw anymore. As the years go by, he started getting involved in music and  grew very passionate about it. Although he laid his art dormant for a while, strangely, it wouldn't die, it would hunt him mentally with overwhelming ideas and dreams that just weren't leaving his mind only because it was the only thing that matched the beat of his heart.

When Kingdom Art grew older, he started seeking purpose for his life and it dawned on him, that being a painter was what he was born to be. Unlike before in his previous years in doing art, He has come to the full understanding of his gift. He realized that it is more impacting to be effective than to be the best. Kingdom Art understood that everyone was born with different personalities even though they may have the same gift and that everything they would do (based on their character) would dictate the outcome or effect their works. He understood that there`s no such thing as a competition and that everyone is uniquely blessed with an originality according the gift they inherited. Kingdom Art renewed his thinking from constantly attempting to be the best, to being more concern in being a standout. He realized that having a gift only means that he would have to serve it to others and in serving it, they would be blessed from it, he saw it as his purpose in life. For this reason he decided to make his art more life related, to focus on the ways of man-kinds, their struggles, spiritual growth and faith. Now that he is more driven than before, he is determined to serve his gift to the world and reach to hearts and minds of the generations connected to him by the influence of his art.