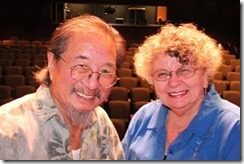 WHEN: July 9 through July 25, Tuesdays and Thursdays, 3 PM-6 PM.
WHERE: Centenary Stage Company on the campus of Centenary College in Hackettstown
TUITION: $350.00 if paid and registered before June 25th and $400.00 if paid and registered after June 25th.
Class size is limited to 10 people.
To register please call the Centenary Stage Company Box Office at 908.979.0900 or register online at centenarystageco.org.

Under the direction of these two acclaimed teachers, students in the Acting Shakespeare Master Class will focus on developing acting skills through the “Bard’s” great literary works that will aid and empower actors embracing auditions as well as performances.  This class is designed for high school seniors, college students, and adult actors wishing to enhance their skills in classical language and performance.

Together with Charles Bright, Kim and Occhiogrosso founded the American Players Theatre in Spring Green, Wisconsin in 1981.  While at the American Players Theatre, Randall Duk Kim played title roles in Hamlet, King Lear, Titus Andronicus, King John, The Merchant of Venice and many more.  He has been seen on Broadway in Flower Drum Song, Golden Child and The King and I, but perhaps is most recognized as The Keymaker in the film Matrix Reloaded, and the voice of Oogway in the DreamWorks’ animated film Kung Fu Panda.

Anne Occhiogrosso has received national acclaim for her work with the American Players Theatre. Occhiogrosso is an accomplished director, dramaturge, acting coach and actor, whose primary focus has been classical theatre with a special emphasis on the works of William Shakespeare.  Occhiogrosso studied with Morris Carnovsky and Phoebe Brand, original members of the renowned Group Theater.  She performed the role of Anna Petrovna in Chekhov’s Ivanov which Carnovsky and Brand directed.  She has also taught acting at the Stella Adler Conservatory of Acting and the New York Shakespeare.